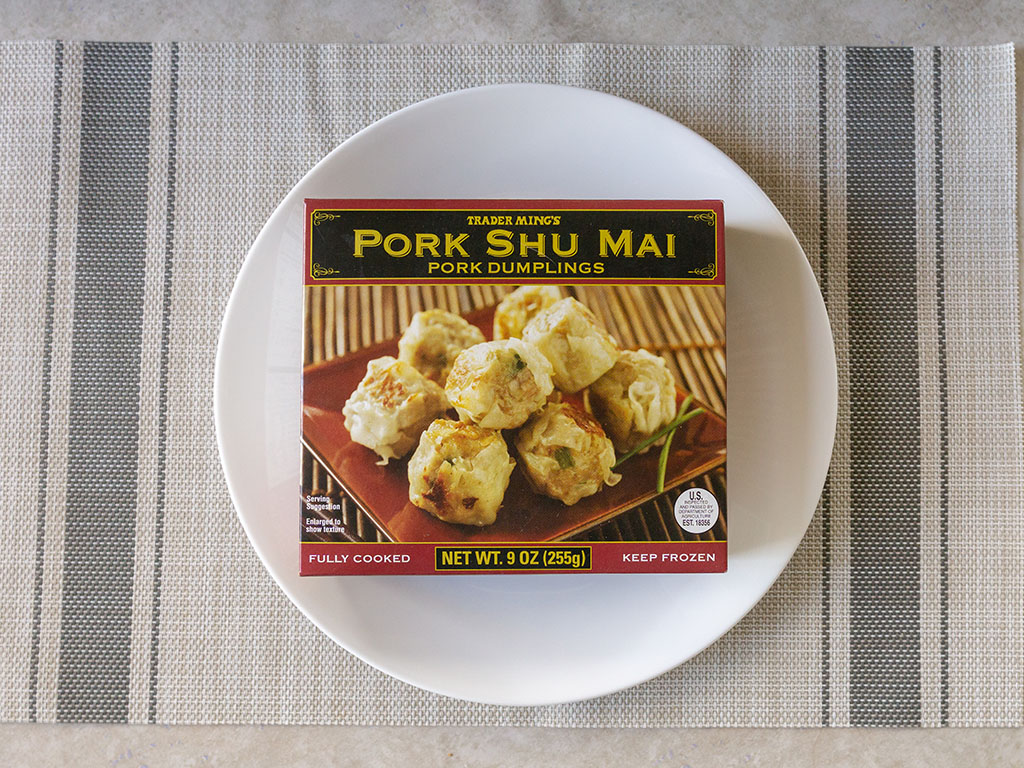 These small Chinese dim sum are sold with a little brevity under the branding of Trader Ming’s. You’ll find them in Trader Joe’s of course amongst all the other frozen goodies year round.

Trader Joe’s is usually a fair bet for frozen foods, not least ones with an International tone to them, and these pork dumplings continue that theme: easily cooked (see below), fairly priced, and a decent facsimile of the real deal; which truth be told, unless you have an exceptional Chinese restaurant in your locale, most restaurants rely on a frozen dumpling anyway.

These dumplings err on the side of a tad smaller than restaurant shu mai I think, but only modestly so. Taste wise, they lead with an assertive onion forward flavor, which will be pretty prominent as they cook. That’s followed by umami and richness from the soy and pork. Very enjoyable, and very easy to eat one after the other after the other…until…all gone.

Inside the cardboard packaging nine dumplings are packed in a single plastic bag. There’s no way to reseal this bag, but I imagine most folks will be finishing these off in just one or two sittings anyway.

Yes! If you’re creating your own home dim sum dinner, or looking for a side dish to snazz up supper you could do far worse than these pork dumplings from Trader Joe’s. Easy to cook, priced great and with many of TJ products – the taste is great.

Note: not many people know, but you can shop Trader Joes on Amazon

– where they offer quite a lot of their product range, provided it’s shelf stable.

Douse in a little water, wrap under a little cling film and microwave for three or four minutes – hey presto, you have your own mini-steam system. Of Course you can also cook these in a real steamer too.

I’ve only microwaved these, as I had such great results, I didn’t feel the need to break out the steamer. I did have to cook the shu man just a little longer than instructed, but that could just be my own microwave at issue. The dumplings come out happily steaming and juicy using this method, just be sure to add a little water as instructed for the steaming process.

How much do Trader Joe’s Pork Shu Mai cost?

I paid $2.99 for these she may in December of 2018. I think that’s more than a fair price given one box will easy serve two people.