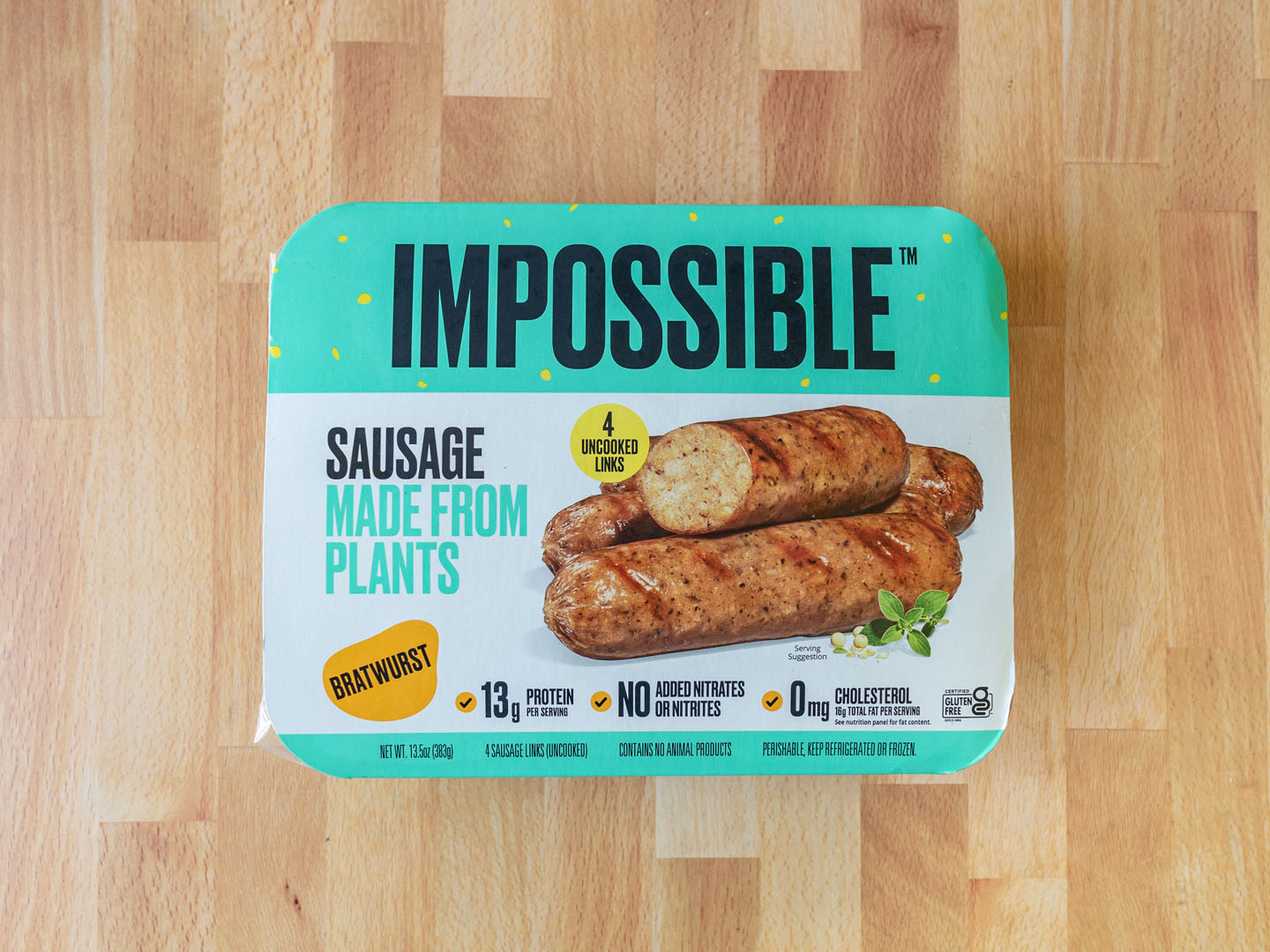 I don’t recall an Impossible Foods product I have been disappointed with. Ever since my first taste of the Impossible Burger years ago, and the “wow” moment, I’ve enjoyed every subsequent product release from the brand. There have been zero failures in my book. When these appeared at my local Kroger, I was pretty excited to dig in. These new bratwurst follow on from the recent Meatballs, Nuggets and ground pork releases.

Here four sausages come inside a plastic sealed container. The whole thing is encased in a cardboard sleeve. It wasn’t clear to me if the plastic covering was meant to be resealable. Either way, I couldn’t with mine, perhaps I was too eager to pry them open. These also came in the freezer aisle, so needed defrosting overnight first too. Like many plant-based meat options, I would imagine stores would place these in both the freezer, and fresh meat section of the store, so do look around.

Cooking: Grill, fry or bake according to the package. I had good success with both pan frying and the air fryer. Compared to their obvious peer, the Beyond Sausage, these did not ooze copious amounts of grease while cooking. I should also note that I also cooked mine once defrosted, not from frozen. I haven’t tried it yet, but a minute or two on defrost mode in a modern microwave should be ok here; I do this with frozen Beyond brats, just proceed slowly and check them often so as not to over cook while defrosting.

Taste and texture: Once again – wow. The taste is tremendously similar to a regular pork based sausage. The texture is smoother than a traditionally coarse bratwurst, but no means emulsified like a hot dog. It has a realistic meaty bite and again, wow that flavor. The sausage doesn’t lean too heavily into herbs either, as many competitors are prone to.

The only real failure is the casing that is visually artificial. It somewhat crisps up, but also rigidly stays in place, looking suspiciously like plastic and causing a brief, “oh crap, was I meant to peel that off, is that actually plastic?” moment.

Overall: Until now, I rated the Beyond Sausage as the market leader in meat-free sausages. That changes with these new sausages from Impossible Foods. They cook up better, they have a better texture and also a fabulous flavor profile that is unmatched. Anything you can make with a regular sausage, you can make with these; Summer BBQ’s through pasta – you name it.

Are Impossible Bratwurst Sausage any good?

Yes, these are hands down the best meat free sausages money can buy.  The flavor is remarkably similar to a pork based sausage, as is the internal texture.