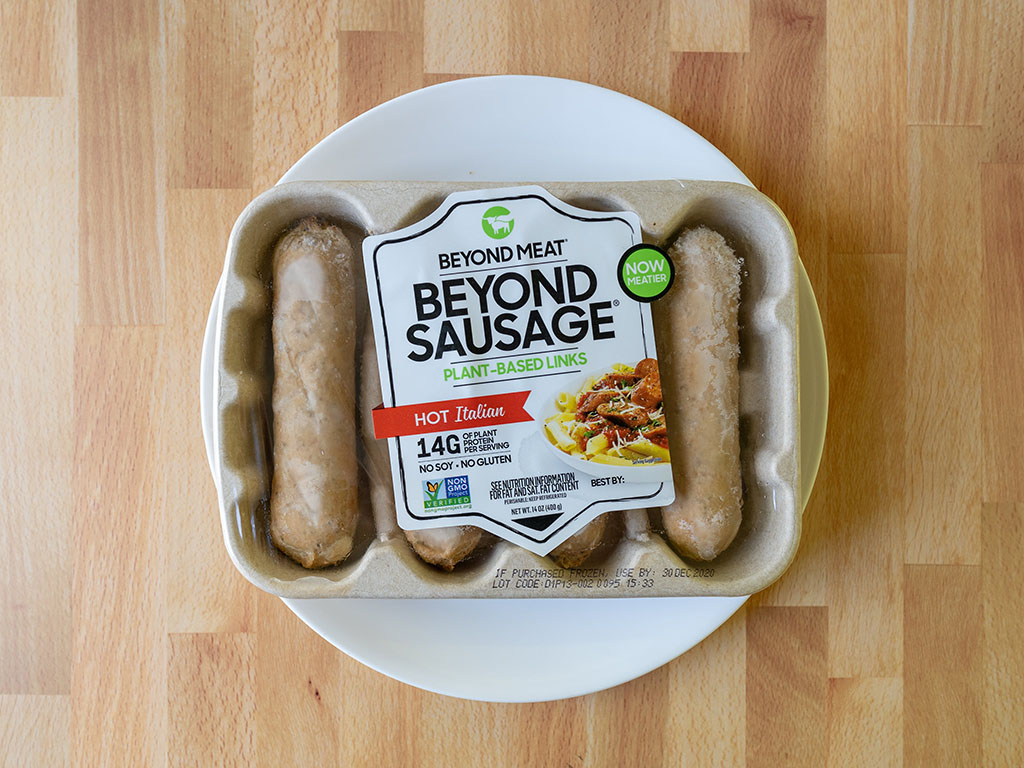 We’re not precisely sure when – but sometime earlier this year – Beyond Meat reformulated their massively popular meat free links. You can scroll down for our original review and thoughts from 2018.

In our first look at these sausages we we’re pretty impressed by the sausages casing, the mesmerizing texture and the fantastic taste. We scored them 3.5/5 merely based on their price; we still think $8.99 for four sausages is kinda crazy – and the price hasn’t changed much today. We see these retailed anywhere from $8.99 – $10.99 locally.

Sadly what’s also changed in the recent update is the taste and texture. Beyond has decided to revamp the sausage’s casing which is absolutely subpar now. It no longer crisps like the real deal. It’s a huge shame. The texture too is now more akin to their burger product and less sausage like. In contrast the taste of these Hot Italian links now has noticeably more kick and flair. They’re certainly more heavily seasoned.

Overall we think the update is a miss. They’re no longer the uncanny replica that they once were. They’re still enjoyable and we will pick them up here and there throughout the year – but that’ll definitely be less and less now. And again at that price point, they’re even less justifiable now. Updated score 3.0/5.0.

The sophomore product line from Beyond Meat is this line of much anticipated and extremely hyped sausages. Presently the peat protein based sausages come in three varieties: regular, sweet Italian and hot Italian. I found all three at my local Whole Foods just recently and grabbed a pack of the hot Italian for testing.

On opening, my first impression was the extremely strong aroma of rosemary. I was initially worried these would be excessively perfumed but curiously the flavor was not nearly as strong after cooking. The sausages are firm and semi-reminiscent of the real deal. Given they’re made from largely the same ingredients as the Beyond Burger you can get an immediate idea of their texture if you’ve sampled the burgers.

So how are they, do they live up to the frenzied hype? I found these sausages taste best right out of the frying pan. As they cooled they lost a little of their sparkle. Sizzling hot though, they were remarkably like a budget pork sausage, the type you find in the freezer aisle, 50 for a dollar. That sounds like damning praise I know, but I was kind of impressed by the texture, the mouthfeel and the sausage casing; which is worthy of particular merit in itself – not chewy or slippery at all. Of course these sausages are made from higher quality ingredients than the filler you’ll find in cheap pork sausages. There’s no GMO here, no gluten, they’re soy free and packed with a ton of protein. And yes, they’re 100% plant based and vegan friendly.

In regards the hot Italian seasoning I was quite let down. Spice wise, I couldn’t detect anything more than a little black pepper warmth on the back of my throat – very mild. The same goes for the Italian seasoning too, minimal and restrained. If cooked as part of a larger dish, say in pasta with a sauce, that’s fine. If you’re loading these up on buns, look to some extra toppings to complete the flavor for sure.

Beyond Meat The Beyond Sausage cooking instructions and nutrition

You’ll need to cook these in the frying pan or on the grill. They’re loaded with fat so if you’re cooking indoors, put a lid on that pan – your kitchen will thank you later. Seriously, these spit and spatter just like the real thing. Like all Beyond Meat products, you won’t want to microwave these. Given their meaty texture, I think they’d do just fine on the grill too, I’d have no worry about them disintegrating over high heat.

Nutritionally, the Beyond Sausage isn’t the healthiest choice. In an effort to capture that real meat lusciousness they’re loaded with fat. Not as much as a pork based product for sure, but don’t mistake plant based for naturally meaning diet food.

Beyond Meat The Beyond Sausage – what’s in the box

Four sausage links come in a cardboard box, the whole lot is wrapped in shrink wrap. Once opened you’ll need to eat these in just a few days time.

The Beyond Sausage – what’s a fair price?

So far I’ve only seen these at Whole Foods where as of June 2018 they’re retailing for a hefty $8.99 per box of four sausages. That’s an undeniably high price point and reflects the products high demand / boutique nature right now. Over time, if these drop to the $4 or lower range, I feel that would be a fair price. I can’t see them being anything but a niche vegan product until they rival or undercut actual pork based sausages.

Here are the Beyond Sausages out of the pan and onto a bun – also a cross section of the interior; notice how remarkably similar these are in texture to the Beyond Burger.

Are Beyond Sausage Hot Italian sausages any good?

Updated 2020 review: Since their update, the quality of these sausages has declined. The casing has been changed for the worse as has the overall texture. They still remain an enjoyable meat free sausage overall, just somewhat lesser now than they once were.

Original review: These are a very enjoyable meat free sausage, but they aren’t the best in their class for multiple reasons. While reminiscent of a budget pork sausage in texture and taste, the Italian seasoning and heat level is minimal. Coupled with the painfully high price and high fat content, it’s not a slam dunk purchase.

Can I cook Beyond Meat sausages from frozen?

I wouldn’t recommend it. By my estimation the results would be like cooking up a regular pork sausage from frozen. At best you’d end up with a frazzled exterior and still frozen and raw interior.

Can I air fry Beyond Sausages?

Definitely! Read more on our sister site Air Fry Guide on how to air fry Beyond Sausages. Note: please always ensure your food is fully cooked and at temp!

How can I cook Beyond Meat sausages from frozen quickly?

I find these defrost identically to a pork sausage. If you place four sausages on a microwavable safe plate and run the defrost mode for around four minutes, they should be perfect for cooking. Follow your own microwave instructions for defrosting specifics.

More Beyond products and dishes