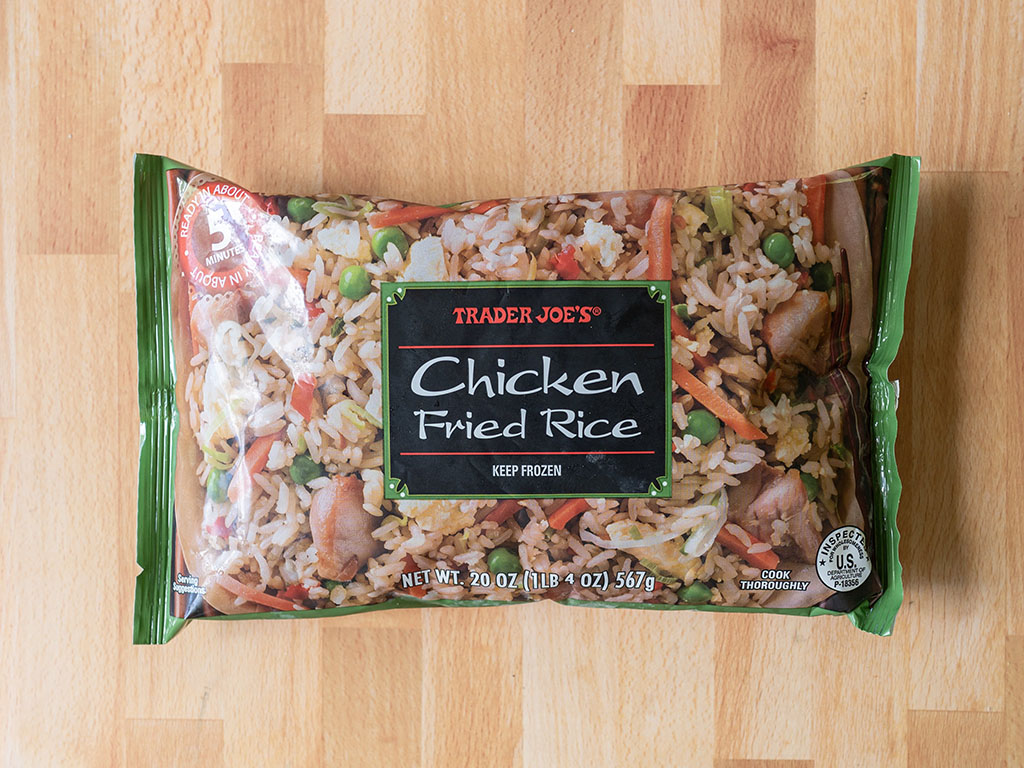 I remember being quite enamored with the veggie fried rice from Trader Joe’s – a brand which can be oh so mercurial. Sure there are some gems on the shelves at TJs, but there are some stinkers too. So where does this one stack up?

Cooking: Microwave or pan fry. The pan fry directions advise on some weird method of covering the pan tented with foil – presumably to trap in some heat and cook the big pieces of chicken and veggies. I figured pan frying would be far better than the microwave. I mean cmon, who microwaves rice.

Taste and texture: I’m not sure if this was a case of user error (but trust me I cook a lot of fried rice, from frozen and from scratch) but this just came out awful. I followed the package instructions but the result was a weird mish mash of under and overcooked rice. I’m still puzzled how I managed to end up with simultaneous pieces of mushy rice and inedible burnt and crisp rice.

The chicken used here is dark meat and to be frank, I don’t think it was of a great quality, it was far from appetizing. The big pieces of scrambled eggs almost universally disintegrated in the frying process and the veggies well, I guess they were ok. Given the sodium levels at work here (see package below) you’d think there’d at least be a huge flavor hit to back the dish up with – there isn’t.

Verdict: This one is a hard pass. Even the most basic take out fried rice beats this. Even my most poorly executed fried rice from scratch is better. I suppose the saving grace is the $2.99 price, but even that’s too high for this dish in my book. I managed maybe a fifth of the package before the garbage can beckoned.

This is a pass for me. Minimal flavor, poor ingredients and a disappointing dish overall.