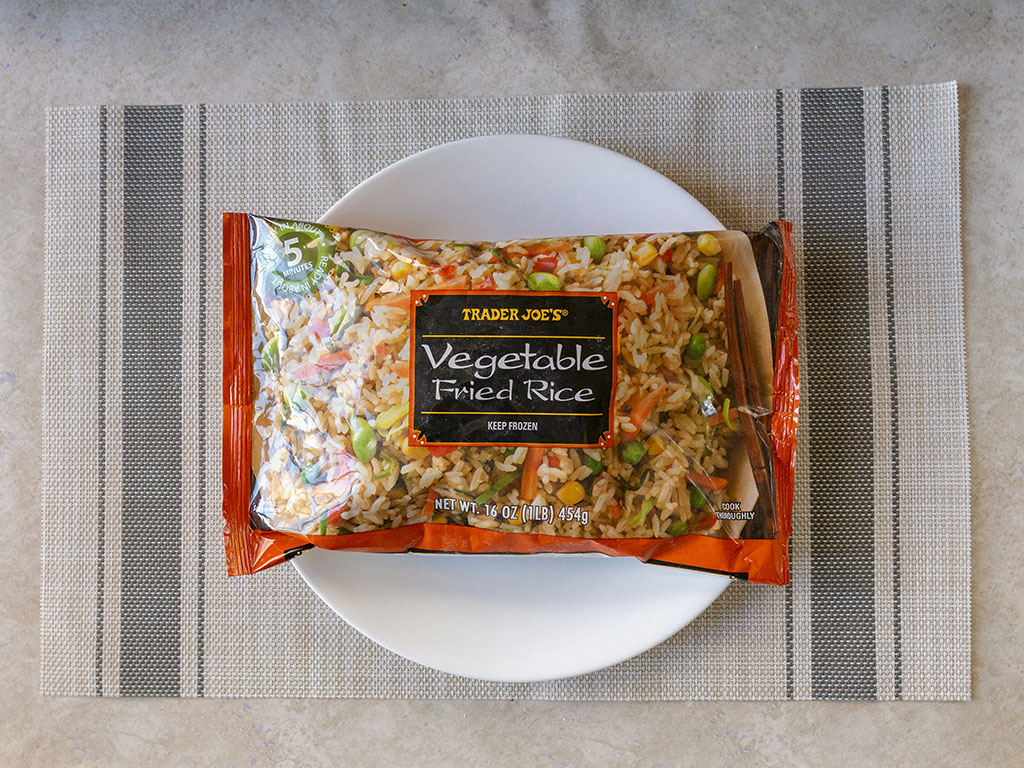 Truth be told, I don’t think I’ve ever had much luck with pre-prepared frozen fried rice. It just doesn’t seem to be a dish that translates all that well to the freezer. Most varieties I’ve tried end up bitty, mushy or flavorless.

I’d much rather enjoy a wok-fresh restaurant version – even a fairly mediocre one at that – over the frozen stuff. Failing that, it’s pretty easy to cook up a decent fried rice, provided you have leftover rice of course. If both of those options are off the table, the frozen stuff promises a quick standby alternative.

Suffices to say, I didn’t go into this product expecting much. Indeed, I’d usually skip past such a product except the Trader Joe’s reliable name, and decent price (see below) drew me in.

And to be honest, I wasn’t too disappointed in this rendition. It’s no match for the real deal, but it still isn’t a half bad rice dish in its own right. Unlike frozen fried rice variations I’ve tested, the rice cooks up to an enjoyable texture – not too mushy and not too grainy.

There’s a decent mix of corn, peas, edamame, bell peppers and other veggies, again, all of which cook up to a pleasing texture. The rice obviously has some soy powered flavoring layered on. It adds a fun umami element to proceedings.

Here’s the rice, out of the bag, still frozen. As you can see the grains have that slightly extra processed quality, presumably the seasoning.

Here’s a few shots of the rice cooked, and because I’m a little piggy, topped with another item from Trader Joe’s, their Shrimp Stir Fry.

The packaging indicates that there are three servings per container. This is of course madness. As anyone who loves fried rice will know, only heaping mounds will do. I easily finished the whole bag in one sitting.

You can cook this product in the pan with five minutes of fruiting or roughly half that in the microwave. I went with the pan fry method in the shots above. Microwaving precooked rice is almost certainly going to deliver a steamed rice, not fried rice experience.

As frozen quick serve fried rice goes, this is one of the best examples I’ve tasted. The dish is still far from the real deal, and you’ll get much better results making your own. That said, the price is good and the convenience is even better with this item.

How much does Trader Joe’s Vegetable Fried Rice cost?

I paid $2.29 for this bag of frozen rice in December 2018. It’s hard to argue with the price, even the cheapest Chinese restaurant usually starts at $6-$8 for fried rice. Check out their chicken fried rice here too.