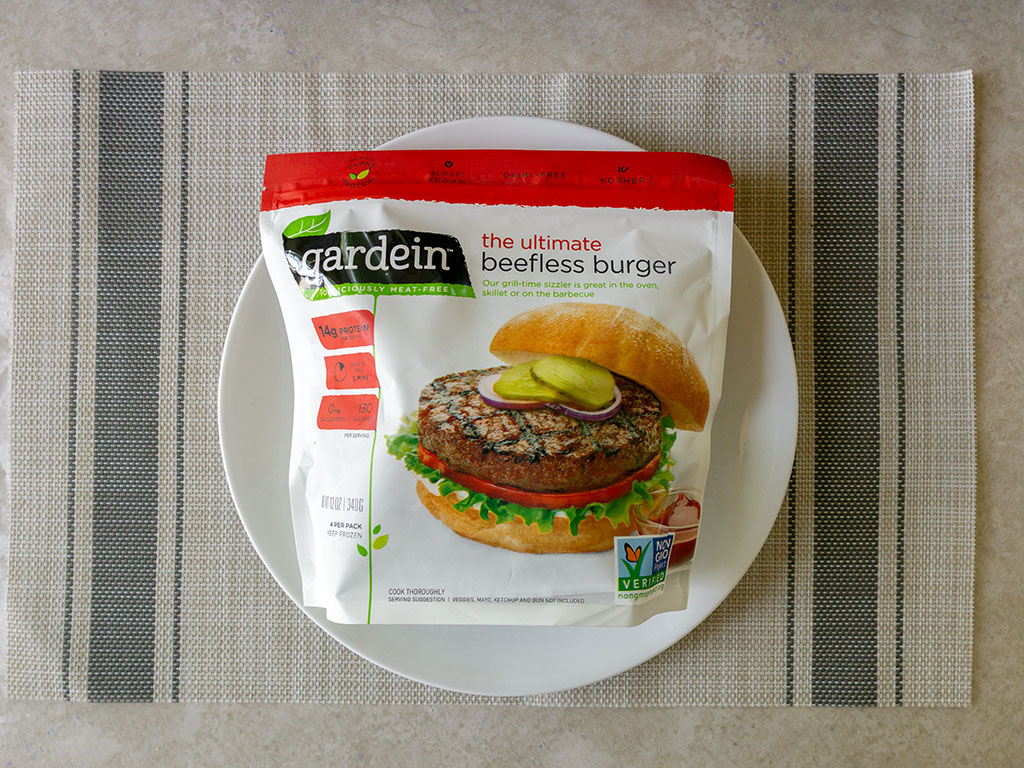 Yes! This meat free burger competes admirably with its peers. It has great flavor and a very meaty texture and it’s an undeniably healthy choice – vegan friendly too. Our only word of caution is the patty doesn’t fare well with overcooking, becoming tough quickly, watch this one closely while cooking.

Ever in search of the best veggie burger – another competitor steps up to the mark to test its mettle. And it starts off with a not inconsiderable claim – this product from Gardein proclaims itself to be the “Ultimate” meat free burger. Definition, ultimate: “the best achievable or imaginable of its kind”.

I usually meet hyperbole like this head on with more than a little cynicism, so I approached this burger very cautiously and with eyebrows suspiciously raised. Was this going to be the ultimate burger? Is this the best imaginable of its kind?

O.k. no, lets get that out of the way first, this isn’t the best burger out there, but it is actually pretty good. In fact it’s definitely a challenger with some of the best on the market right now and competes squarely with the style of patty from MorningStar Farms and Whole Foods. Flavor-wise this is less meaty than the 365 patty and more similar to MorningStar Farms Griller; though the Gardein patty has a noticeably apparent celery back note. I found that quite pleasant, if you’re not a fan of celery you might want to avoid.

It’s hard to separate this patty from those mentioned above. All three are very good products and the margin of difference slim. In choosing the final score I have to give this burger credit for being vegan friendly (MorningStar Grillers aren’t), but also slightly ding it for its cooking quirks (see below).

Gardein The Ultimate Beefless Burger – what’s in the box?

Four patties, three ounces in weight each, come in the resealable plastic bag. I’m, really getting to love these pinch shut bags that Gardein and MorningStar Farms use on the products, more should follow suit.

In the pan, on the grill or in the microwave, its all good. Ever the lazy so and so, my first attempt with this burger was the microwave. That’s when the largest flaw with this product appeared – its completely unforgiving to overcooking. Just like the Gardein sliders, if you go too far with these in the microwave, you’ll end up with inedible disks. If you do go down the microwave path, cook for smaller periods of time, testing as you go.

The pan technique fared eminently better as it was much easier to gauge temperature and texture. I’d also heartily recommend the for the grill with their sturdy texture, again just keep a careful watch on them. My actual preferred technique for these burgers was 30-45 seconds a side in the microwave, before finishing in the pan with a sauce (see hoisin burger below).

Nutritionally, you’re getting 14g of protein here, with little fat and just a modicum of salt. Nutritionally they’re certainly a winner.

For something a little more complex, I’ve been having a lot of fun with this Asian themed preparation. After part cooking the burgers in the microwave, I finish them in the pan with just a teaspoon or two of hoisin. Enough to cook them through and coat evenly. From there, serve on a bun with sriracha spike coleslaw.

I paid $4.69 for these from my local Whole Foods. I’d say anywhere in the $3.50-$5.00 range is more than acceptable for these. Stores will often have Gardein brand sales all at once, so you might scoop a deal up from time to time.

Check out all our reviews of meat free burgers:

Other Gardein products to check out