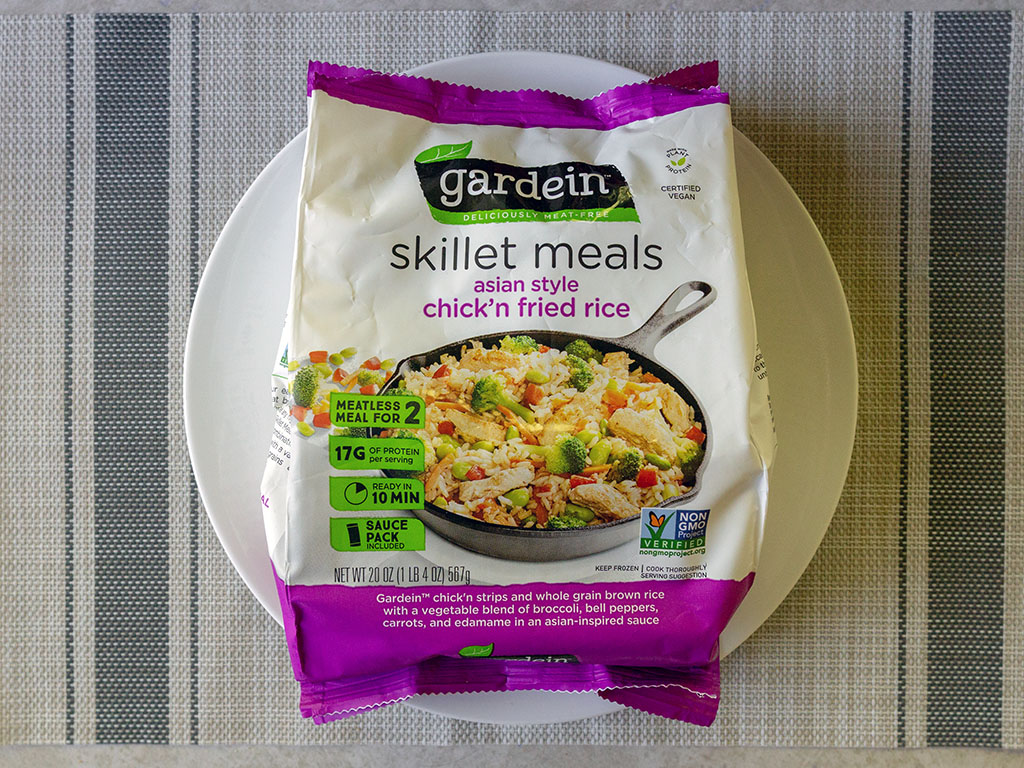 Sadly we can’t recommend this dish. If you’re really craving veggie fried rice we’d recommend your local restaurant, or if you have a little more time, a home cooked dish. We’re fans of Gardein in general, but this meal kit misses the mark on a few points.

I was caught completely unawares by this product. As far as I knew, Gardein was solely in the business of making standalone meat substitutes: burgers, breakfast sausage, faux chicken and so forth. I had no idea they also crafted complete meal solution kits, so when I spied this fried rice kit in the freezer aisle it was an immediate purchase.

Let me start by saying I’m a huge fan of well executed fried rice, I even make several mean versions from scratch myself; everything from classic to kimchi fried rice. Yes, yes, I know its traditionally a way to use up leftovers, and traditionally considered something of a junk dish served at the end of a more lavish meal as mere filler – but hey – it’s one of my favorite unhealthy treats. Let’s be honest, good fried rice is never healthy!

Sadly, this product was a let down for me. The mix of vegetables and plain chick’n meat was not appealing to me at all, indeed it wasn’t like any fried rice I’ve tasted previously. At best I might generously call this, “inspired by fried rice”.

The chick’n seemed to be an unbranded version of that used in the Gardein Mandarin Orange Crispy Chick’n product; but without a breading or coating it was bland and uninspiring. Home cooks would fare far better in cooking a vegan meat substitute product separately and adding it to a fried rice dish manually.

Moreover, the sauce packet that comes with the dish adds little in terms of authentic flavor, best I could tell it was a vague mix of soy/hoisin and was overly sweet. Again, home cooks could probably create a far better flavor profile with some judicious use of soy and similar seasonings. Honestly, I was desperate to gussy up the rice with some added flavor, but one look at the sodium already in the dish (see below) and I demurred.

More failings for me included a forgettable mix of edamame, carrots and broccoli studding the rice; a portion size advertised as serving two, but more effectively a hearty one person portion; and lastly a less than fun texture in the finished dish. A let down across the board.

I’m not sure who this product is aimed at; which in itself is a niche within a niche (vegan frozen meal). If you live in a town with a grocery store large enough to stock this boutique product, I am guessing you have at least one if not more vegetarian and vegan restaurants. They’ll be hands down better than this dish and maybe at a lower cost (see below).

I wanted to love this dish a lot more than I did. My advice would be to use some of the fabulous stand alone Gardein products and make your own fried rice from scratch, its really simple, rewarding and tasty.

Once you open the bag the intent is clear, you’re expected to cook the whole meal at once. The bag opens in a fashion that’s far from resealable and there’s just one accompanying sauce packet.

As you can see, the bag is advertised as being for two people. I could have easily ate the whole cooked packet by myself (that’s the whole finished product in the image above by the way) and even more; side note, I didn’t as I ended up discarding the last third.

This is a pretty simple meal to cook up. Fry in a little out for five minutes covered, then 3-5 minutes more with the accompanying sauce pack.

I found this at a higher end local grocery store priced $7.99. At this price point the product is not attractive to me at all. There are several local restaurants close to me that prepare a better and fresh veg fried rice for less than $7.

Other Gardein products to check out