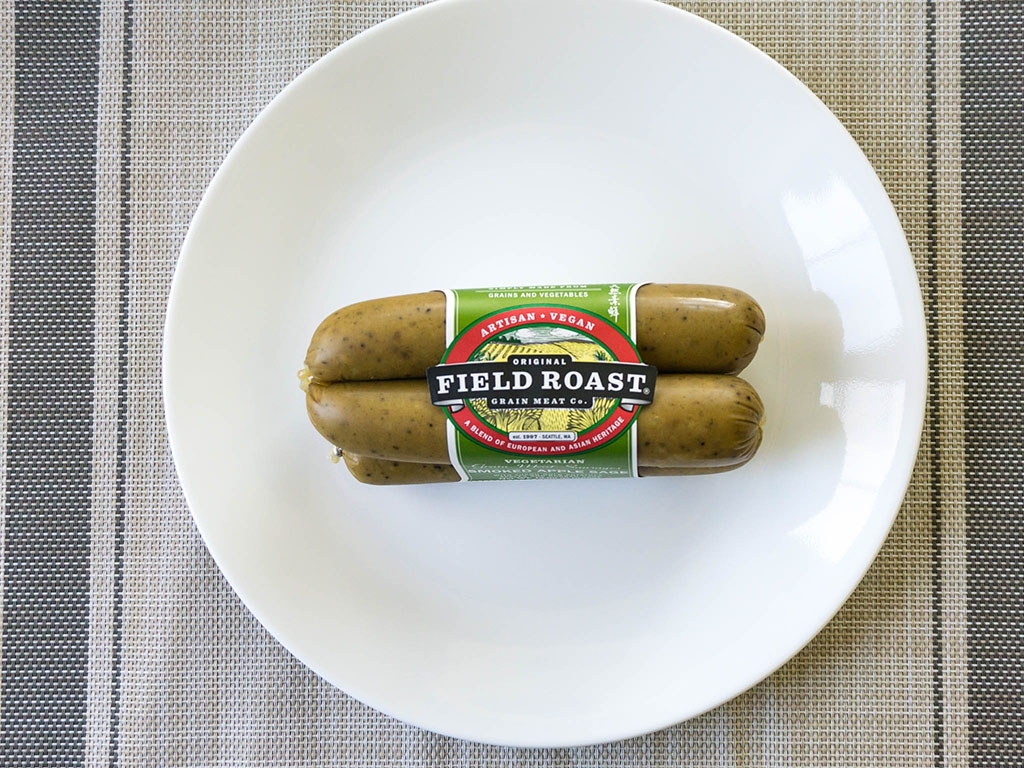 Yes, these are a pretty decent meat substitute. Relatively easy to prepare with a pleasantly subtle sweet-Apple flavor. Bonus points for their fantastic protein too.

These vegetarian sausages are usually found in the refrigerated section of the store; often times in a place like Whole Foods they’re intermingled with the vegan products. I’m not quite sure why they’re not vegan themselves, looking at the ingredients I can’t see anything of note. There’s probably some egg or milk lurking in one of the benign items is my guess. These sausages come four links to a pack and are wrapped in protective plastic casing. You need to remove the casing before preparing the sausage.

The sausages are fairly robust, I expected they might crumble on removing the casing but the opposite is true. They stay firmly solid, even after some aggressive pan frying at high temperature.

Taste wise I am big fan of these, they’re quite reminiscent of Tofurky products, but are less bitter/sour. The apple adds a really enjoyable and subtle sweetness that grows on the palate through the meal. Each sausage weighs in at a mighty 25g of protein, which means if you tackle two like me, you’ll be fairly stuffed. Like all meat-sub products they do this at vastly lower levels of saturated fat, albeit the sodium isn’t amazing.

These sausages need a pan fry or throwing onto the BBQ – whatever your chosen method – you’re basically heating and serving. Fried in the pan, they retain a great crisp on the exterior not unlike a real sausage. I was quite surprised they didn’t devolve into a small pile of crumbles; though the packaging notes you can certainly do this if you’re looking for a ground sausage alternative. To date I’ve only pan fried these as whole links.

Five bucks or under. I’ve seen these as cheap as $4.97 at Walmart and similar priced at Whole Foods. The highest price I’ve found was $5.97 at Smith’s.

Four sausages, each delineated from the next with a nice little twist of plastic. This means you can open them one at a time if you like, no need to use them all at once. The shelf life is usually a few weeks from purchase.

What can I make with Field Roast Smoked Apple Sage Sausage?

I love to fry these off with russet potatoes in a good amount of oil. Throw them in at the last 5-10 minutes and you have a splendid hash to go alongside some sunny side up eggs.

O.k. for the sake of the purists out there I’ll have to call it a Chicago-inspired vegan dog; I couldn’t get a hold of sports peppers, and I prefer sliced pickle over a whole spear – I mean cmon on a tiny hot dog bun? Anyway, suffices to say, Field Roast make great sausages for your own loaded dog creation.

Of course, there are myriad ways you can craft a gourmet hot dog – for something a little more off the beaten path, what about this fajita skillet plate? In the following dish I pan fried some sliced Field Roast with garlic, smoked paprika, oregano and cumin. From there I plated it with some skillet veggies, guacamole, salsa and veggie refried beans. Delicious!

Other Field Roast products to check out