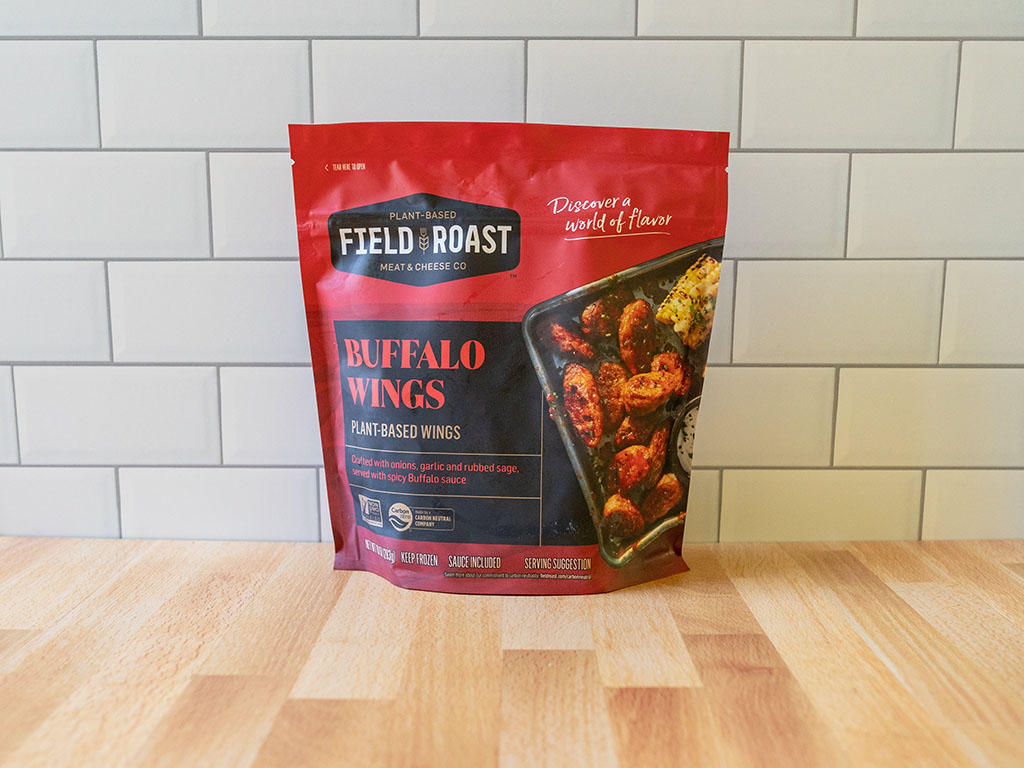 This is the type of product that incredulous meat eaters often look at and ask, “so you don’t eat animals huh, why do you have to copy an animal product.” After all you don’t get more visceral than a ‘wing’. The answer is of course simple. I’m only a part time vegan but it’s as simple as: hey we don’t want to sit in the corner and eat a raw carrot at the BBQ you guys.

Cooking: The packet instructs you to cook these wings in the oven or frying pan. The idea is to crisp the exterior then add the packaged buffalo sauce at the end. You just warm that through. I actually went with the air fryer and managed to get a really great crisp on the exterior of these, no extra oil needed.

Taste and texture: To be clear, they look and taste nothing like wings. They actually look like slices of sausages cut on a slight diagonal. That actually makes sense when you bite in – these taste exactly like Field Roast’s Apple Sage Sausages – albeit with a crisp exterior batter. The taste is sweetly-apple forward with general vegetal background. The texture has a good chew, it’s not mushy, and the batter is stellar.

The buffalo sauce is the surprising inclusion. It’s a big and brash hit of acid and heat – it doesn’t hold back. It completely obliterates the underlying taste of the Field Roast wings which is both a good and bad point. Also, that bright neon color cooks right out when cooked .

Overall: I’m a fan of the Field Roast line up for the most part – and these are another great addition. The flavor and texture is fun, and the buffalo sauce might even have your meat-eating friends jealousy asking for a spoonful. One small issue is that the sauce is provided as a single sachet; if you want to eat the wings over more than one meal, you will need to bring your own sauce.