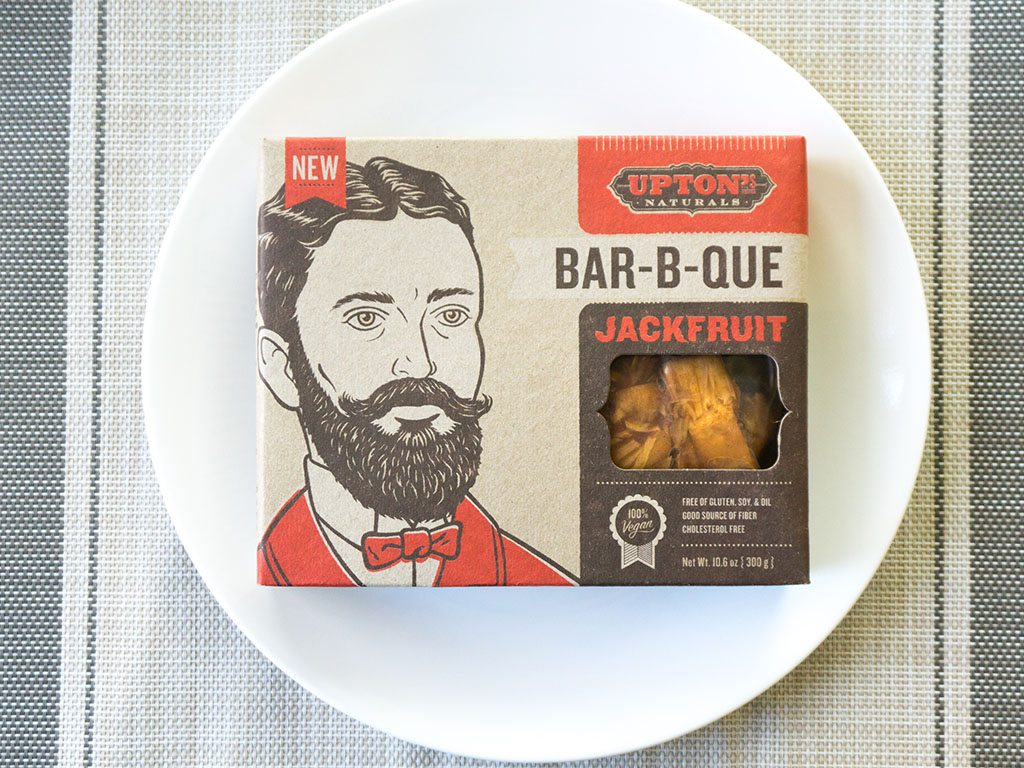 For those looking for an accessible and simple way to get to know Jackfruit, Upton’s is a great product to get acquainted.

Jackfruit has been all the rage the last few years. A staple of Asian markets and pantries, the spiky fruit has reached awareness in the West as a versatile meat-free substitute; due to its slightly meaty texture and largely neutral taste, it can happily take on whatever flavor you throw at it.

I’ve cooked jackfruit from scratch a few times, so was intrigued when I spied this pre-prepared and sauced product at Whole Foods. For what it’s worth, starting from scratch yourself is easy enough, its just a lot more time consuming. You’ve got to drain and pat dry the jackfruit (commonly canned in water), take out the little hard seed things (technical term) and then nail the rub or sauce of your choice. The Upton’s BBQ jackfruit makes it as simple as opening a bag – they’ve taken care of everything else and the quality shows right down to the packaging.

Taste wise this was personally too sweet and one note for me. The packet even has suggestions for how to go sweeter still – which I think highlights my own preferences here. I prefer a dry rub, more smoky and earthy with lots of spice, as opposed to the Upton’s saucey-sweet approach.

As you can see below, jackfruit itself doesn’t have much of any nutritional value. The main carb and sodium component of this product comes from the BBQ sauce. Cooking wise, it’s fairly simple going: open the bag, add to an oiled pan, cook away until you’re happy with the texture. The Upton’s product has fairly big chunks of jackfruit, so you’ll probably want to break those down a little while cooking; otherwise the larger pieces can have a texture more than of pineapple than pork.

Once you pop open the handsome cardboard packing you’ll find one plastic vac-sealed pack of jackfruit in space. The shelf life as such is quite extensive. If you check the packaging above you’ll see the expiry date was 2019 for a box I purchased in early 2018.

I’ve only found this product in Whole Foods so far, where I last spied it retaining for $4.99. For reference, you can usually find a can of jackfruit in an Asian market (make sure it’s in water, not syrup) for about a buck. You’re paying a premium for sure for the convenience.

What dishes can you make with jackfruit

Jackfruit is commonly used as meat-free substitute for pulled pork or chicken. One of my favorite dishes is to emulate a classic BBQ plate or sandwich. Here’s a plate I craft quite often; Upton’s Natural BBQ Jackfruit, Bush’s vegetarian beans, Hush puppies, home made rolls, home made BBQ sauce, home made slaw and home made Boston cucumber salad: