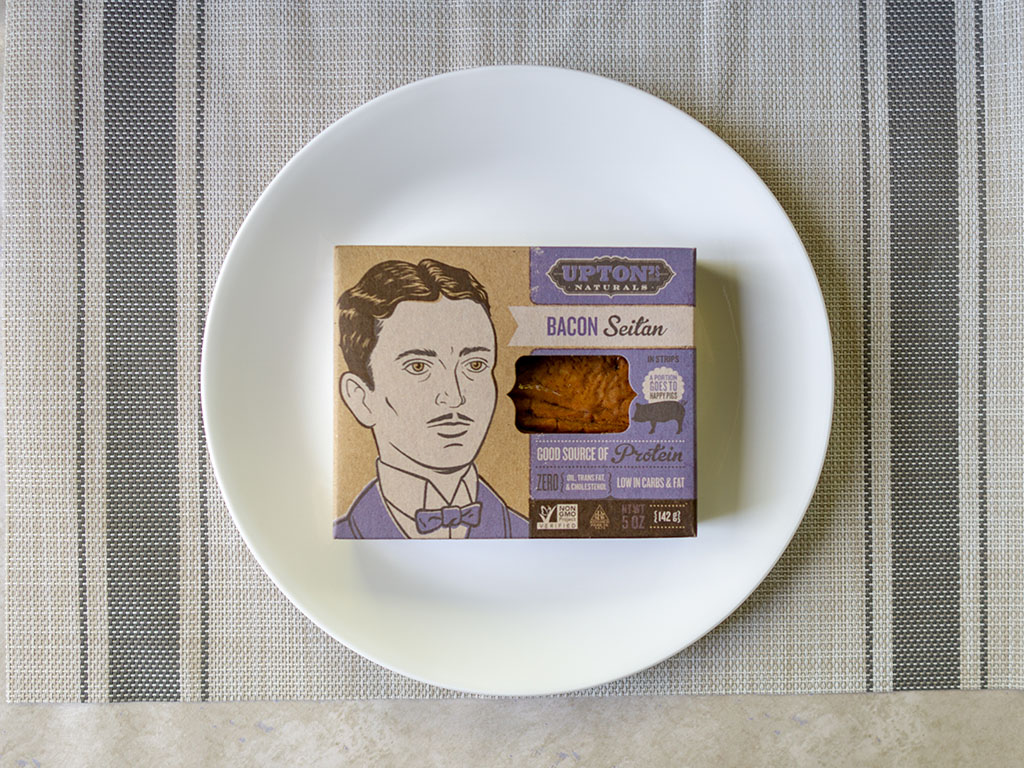 Absolutely yes! This is hands down our favorite meat free bacon with a really enjoyable natural hickory smoke flavor.

As with the entire range of Upton’s Naturals products the first thing that catches your eye is the impeccable packaging. The recycled cardboard box is ultra-modern and hip.

I’ve not had the best of luck with meat free bacon products in the past, the flavor profile always being exceptionally synthetic. Here, I am happy to report the exact opposite. Upton’s lists natural hickory smoke extract as an ingredient, and whatever that means in practice, it shines through with a very clean and organic flavor. Seriously, on a fresh roll with a dash of ketchup, once or twice I half forgot I was eating a faux-meat product at times. Loaded up onto a veggie burger the bacon added richness just like the real deal.

The texture is where the product falters ever so slightly. My wife didn’t care for the slightly spongy texture of the bacon, I actually enjoyed the slight chew. If you like seitan in general, you’ll know the texture. If I had one tiny criticism it would be here, some consumers will undoubtedly prefer a little more crunch and crisp with their bacon. It’s a personal preference and for me this easily makes our Smart Buys list.

All of the bacon, around ten strips, comes vacuum sealed in plastic. Once you open this the bacon has a fridge life of about five days. I found it hard to resist finishing off the whole packet in half that time.

It couldn’t be simpler to cook, just heat and serve. Add to a pan with a tiny drop of olive oil and heat on high until the bacon develops a quick sear – and that’s about it. Just a handful of minutes from package to plate.

Nutritionally this is a stellar product. A 2 ounce serving has roughly 15g of protein without any of the salt or fat of real bacon.

I grabbed this while on offer at my local Natural Grocers store, and managed to nab it for just $2.95. For less than three bucks this is a steal as I happily enjoyed the bacon across three different meals.

What dishes can you make with Upton’s Naturals Seitan Bacon

The classic bacon sandwich was my first port of call, finished with just a smidge of natural ketchup from Rustic Tomato; after that I created a luxurious burger with Field Roast FieldBurgers. Each one was a sure fire winner.