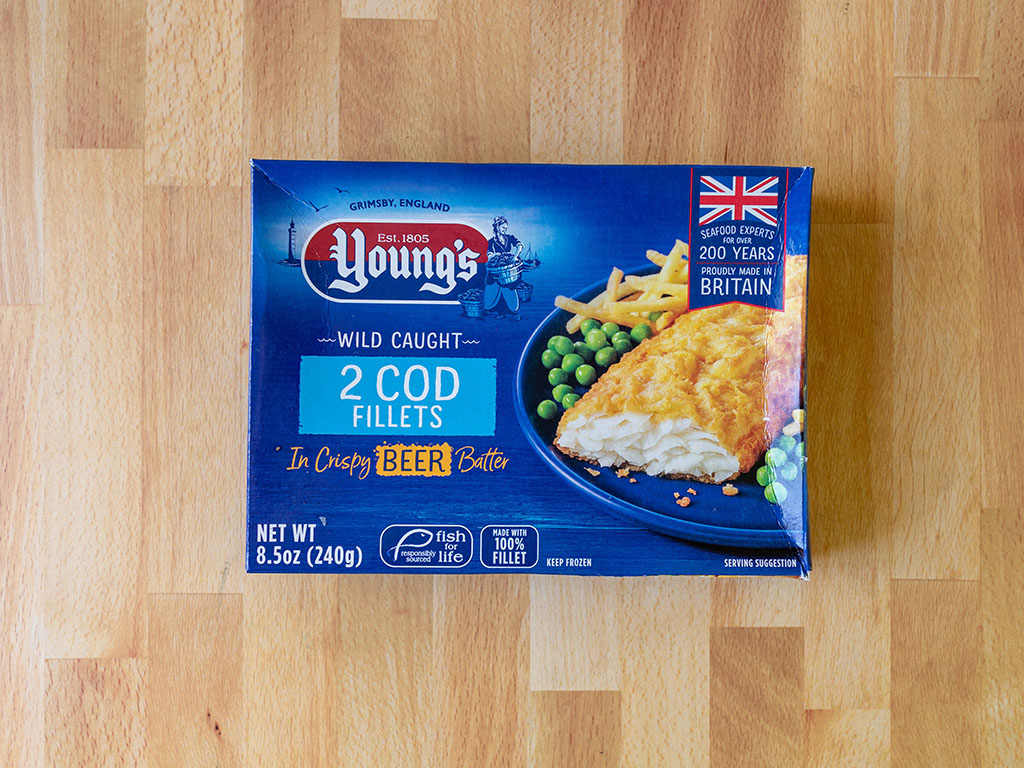 As a British ex-pat, I take my battered and fried fish seriously (who doesn’t love fish and chips!). Sadly, no matter how many frozen fish products I’ve sampled, very few live up to their appealing package. Most end up soggy, mushy, limp and listless lumps.

I found this 2-pack of frozen and battered cod from Young’s at Walmart. I’ll be honest, the Union Jack and British red, white, blue colours kinda suckered me in. Curiously, while the package states Young’s is the UK’s No 1 seafood company, I can’t say I had ever heard of them.

Cooking: You can oven bake or deep fry these. As ever I reached for the air fryer, a great middle ground between the two. The fryer did create a little smoke half way through, indicating some decent levels of grease in the product.

Taste and texture: With the first bite, the batter immediately hits you as the stand out star. It’s thick with mountain like ridges and ripples. Suffices to say, there’s a lot of oil locked up in that batter. Cooked correctly it does crisp up quite lovely though. The fish is decent, firm and flaky. There’s no overt sliminess or mushiness between the batter and fish layers.

Overall: This one immediately entered our best frozen fish list. It’s not perfect by any means, the heavy-oiliness does wear on the palate toward the end. It is however notably superior to a lot of competing products and more than suitable for a plate of home made fish and chips.

These are a solid frozen fish product, demonstrably better than some of the *big* names in the freezer aisle. Firm and flaky white fish is held in a thick crunchy batter – just keep an eye on the oiliness here.