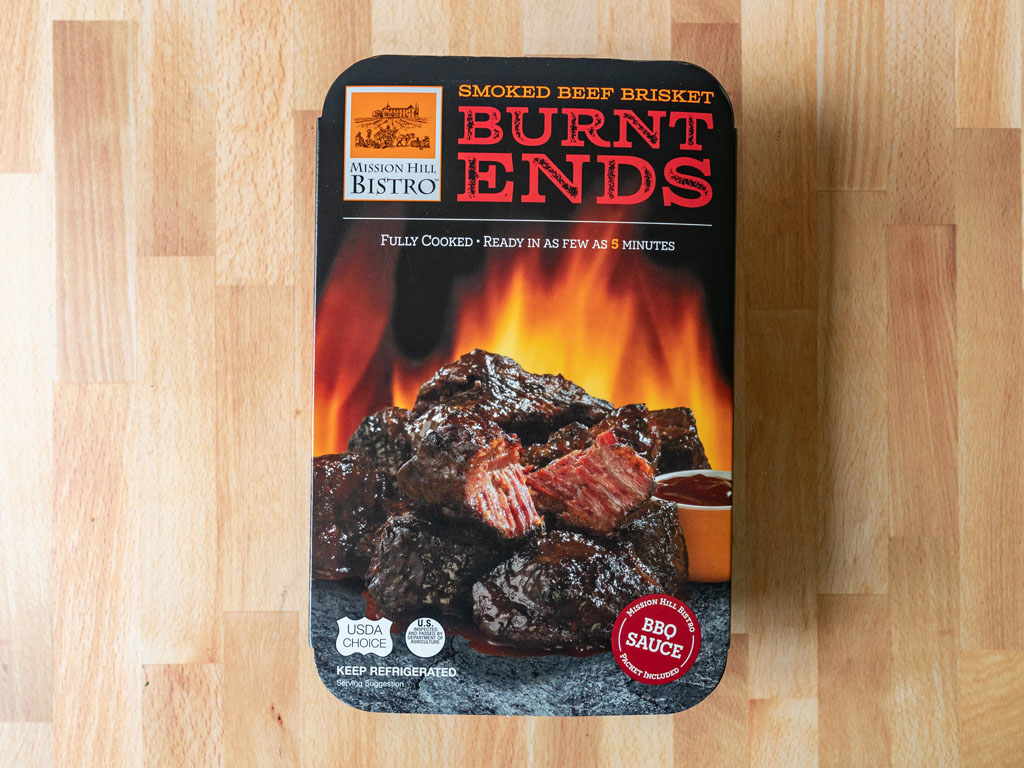 A random ramble through the aisles of Costco always turns up something interesting and new. My latest find – this eye catching BBQ product. The packaging is all red and black and flames – and big pieces of smoked brisket.

Burnt ends are a particular speciality of certain BBQ restaurants, often being a limited dish on the menu at certain times of the week; coming as they do from a small part of the brisket end.

Cooking: The brisket is already cooked (duh) so all you’re really doing is reheating. I microwaved on night one, then on subsequent days I found myself reheating in the pan. I actually found the latter a little better, adding a little water as I heated the meat (shredding with a fork too) resulted in a better texture. This might sound like heresy to Q-experts.

Taste and texture: These brisket bites erupt with billowing plumes of smoke flavor – once heated through your whole house will be filled with their thick and dense aroma. This might be a good or bad thing. Definitely check with the rest of the household. These are big, bold and go full throttle in this regards.

The underlying brisket is lost somewhat by all that smoke, but I found the general taste enjoyable. That said I should note the salt levels are very high. All that smoke and sodium starts to wear on the palate after a bit. Less is more here.

I found the texture variable. There’s for sure a thick crisp bark on the exterior, but the initial microwaving resulted in relatively chewy and sinewy texture. The next days pan fry and saute in a little water was much better, and produced more tender meat.

The accompanying BBQ sauce surprised me, in that it wasn’t an unreasonable sugar bomb, like most are. A gentle sweetness was matched by some back of throat heat and a tangy fruity finish.

Verdict: I’m slightly torn on these. If you have a great BBQ shop in your area, or are a mean pit master yourself – you won’t be impressed. It’s worth remembering your buying pre-smoked, pre-packaged meat. Then you’re reheating it at home. This isn’t world class BBQ fresh from the smoker. In the context of what it is though – quick, easy and fun – it works, and it’s a BBQ meat you don’t often see on shelves (pulled pork being the ubiquitous BBQ in stores).

For the price of just over $16 I managed to make three decent sized meals that were enjoyable and different – though I probably wouldn’t serve them up to a BBQ-fanatic. The packaging reckons you can make four, I wouldn’t argue with that.

What else is out there: if you’re looking to bring the BBQ to your home, I recently discovered Southside Market & BBQ out of Texas. Here’s some of their rope sausage I tasted – they also offer a range of smoked meats delivered to your door too. In the grocery store my current favorite is the Niman Ranch pulled pork product.

More thoughts: scroll to the bottom of the page to see what other shoppers thought of the product. The general consensus is I was too kind on this one.

Here’s the product in pictures: