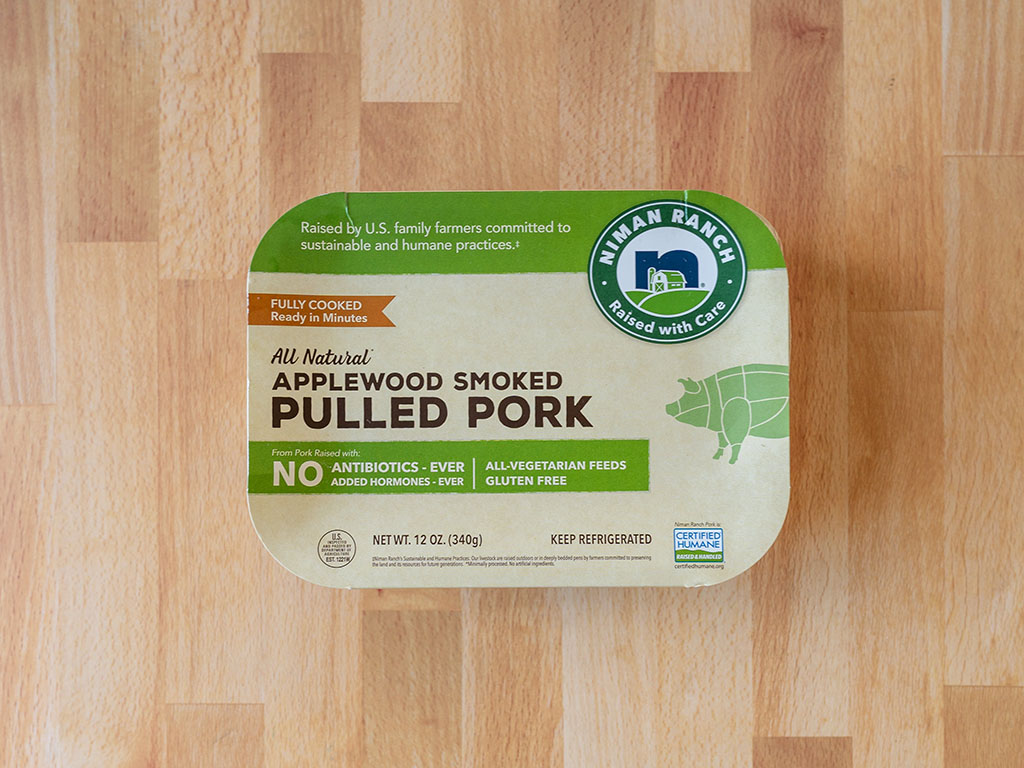 Niman Ranch is typically a solid name when it comes to selecting meat products – after all – their ‘commitment to quality’ is front and center across packaging and website alike.; there’s lots of good words on their packages like grass fed, organic, humane, sustainable etc. That said, pre-cooked, store bought BBQ can be a fraught thing. I can’t tell you the number of times I’ve hung my head in disappointment at some ill thought out, mass produced BBQ.

This applewood-smoked pulled pork comes in an attractive cardboard case (recyclable of course) and inside that a vacuum sealed pile of pork. If it seems a little small at first, don’t worry, once you shred it up with a couple of forks, it’s actually rather a lot of meat. I paid $8.99 at Whole Foods for this 12 ounce pack, which felt like a really great value, when unfurled out on a plate. There’s plenty enough for here for several reasonable sized sandwiches:

Cooking: The hard work of smoking the meat is already done for you. This is a simple heat and serve dish. Throw it in the oven, the microwave or the frying pan; I did the latter in a non stick pan and gently heated it up – the pork has enough fat itself by itself, you don’t need any oil. Maybe add a little water while cooking to soften things up.

Taste and texture: Absolutely top notch. From the moment you open the packet, to heating up the meat, to the tasting – you’re hit with gentle smokey notes. It’s all campfires, setting sun and good times with a few beers. The smoke doesn’t smash you over the head, nor does it vanish into the background. It’s very well balanced. The pork itself has some nice pink tinged smoke ring-effect here and there. I instantly made the remark that this tasted better than many in person BBQ restaurants I’ve visited down through the years.

Other: Obviously this won’t beat the best BBQ joints out there, of course it won’t. Its a pre-made, pre-packed item. Nothing will beat freshly roasted meat by the most skilled Q experts.

Verdict: Yes please, more now please. For less than ten bucks, and the quality on offer, this seems like a steal to me. Throw it on a bun (like I did below), make some loaded nacho fries, or just eat it slowly while drooling. It’s all good.

Here’s the pulled pork in action via a couple of sandwiches I made with slaw, hot mustard sauce and a home made quick pickled cucumber salad.