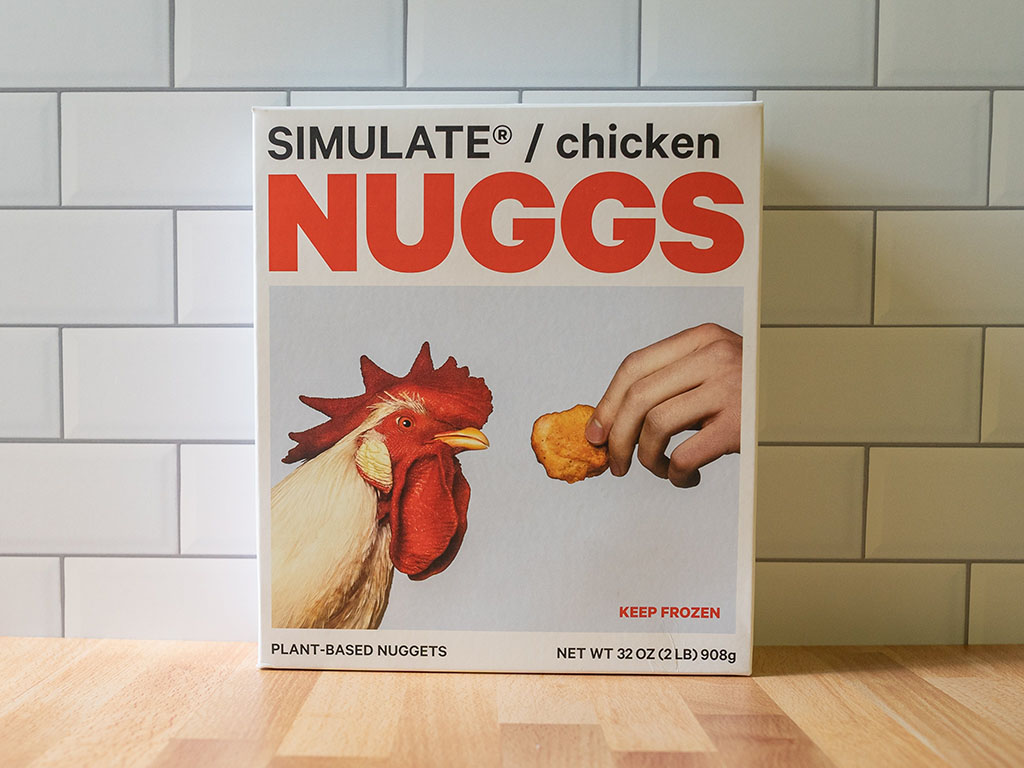 Disclosure: NUGGS provided me with free product samples for the purpose of this review, but my thoughts are my own.

As the plant based burger wars escalate on an almost daily basis, there seems to be less innovation in other meaty areas. Meat free nuggets for example are still the same staid affairs they’ve always been – a largely mushy mess.

This product from NUGGS sets to fix all that, billing itself as “the Tesla of chicken”. Indeed the whole packaging and marketing side of things from the company is loosely modeled on that of a tech company, not a food company. It’s all rather tongue in cheek of course, the packaging for example asking you to “install your freshly delivered nuggs in the freezer” on arrival.

Speaking of which NUGGS ship frozen to your door (I believe they will appear on supermarket shelves sometime later this year from what I’ve heard online) right now, arriving in 2lb plastic sacks – sadly not resealable – as shown here:

The frozen NUGGS certainly look like the real deal, indeed they have a similar aroma too. Lets get the obvious out of the way first; a real chicken nugget, if there’s such a thing, is already a highly processed food item. Chicken nuggets by definition are already so far removed from poultry, that a would be copy cat doesn’t have to work quite so hard as a burger.

We’re already dealing with a facsimile when we’re talking about a chicken nugget as it is. This point is seemingly lost on many. Want a chuckle? Check out the irate commentary on social media for products like this, where those with little grasp on what’s actually in their food complain about so called ‘fake meat’. Personally, I can’t think of anything more fake than a real chicken nugget!

Here are the first NUGGS I cooked up in my air fryer, more on that later:

As you can see from the pictures they’re visibly similar to the real deal. So how do they taste? The first thing that hits you is the outstandingly crisp exterior. These have a terrifically enjoyable crunch when you bite in. It’s clear a lot of the work on this product has gone into the breading. It’s all rather mesmerizing.

The interior faux chicken is less wonderful, at least when examined by itself. There’s a flavor/product memory I can’t quite grasp. I think it’s reminiscent of earlier vegan chicken burgers back in the day. It’s not unpleasant by any means, indeed I found that it grew on me. It’s just… kinda neutral of a sorts.

And perhaps that’s the point – when dipped in your favorite sauce and enjoyed with the crunch of the nugget bite, the interior taste is secondary.

What else did I make with these? First up, what I like to call the Triple No Threat Burger. This vegan treat is comprised of an Impossible Burger patty, grilled onions, MorningStar Bacon and a healthy lower layer of air fried NUGGS. There’s some Great Value Chicken Dipping sauce on there too – I’m not sure that’s actually vegan friendly mind you.

Or how about a meat free BBQ meal? Here I finished the NUGGS With some homemade BBQ sauce and served with home made BBQ beans, lime spritzed cucumber and home made slaw.

Or of course the tried and tested way. Unleash your inner kid with nuggets and fries – and yes – every single dipping sauce you can find in the fridge and fit on the plate!

Heres another idea – air fried nuggs sliced on a wrap with fajita veggies and fixings!

Nutritionally there’s a lot to like, the protein is good, the fat is low. Sure the sodium is a little high, but then, that’s one of the trade offs with so many frozen products.

The box only provides details for oven baking NUGGS which for me is a complete no go in the Summer months when my AC is doing all it can to keep the house warm. The oven doesn’t get switched on May through September here! With that in mind, check out our sister site Air Fry Guide for info on how to air fry NUGGS.

In the final analysis, I can comfortably say that I’m a fan of the NUGGS. They’re easily as good as any meat free competitor on the market today – if not better than most. This current version (2.0, remember the tech company vibe) will surely be iterated on time and again. I’m excited to see how the company develops this product over time, and I’ll certainly report back with more info when they do!

Are NUGGS any good?

I really enjoyed this 2.0 version of the NUGGS product. It’s one of the very best meat free chicken nuggets I’ve sampled. The exterior breading is fabulous and the star of the show. The interior is a little less spectacular but it’s still solid.