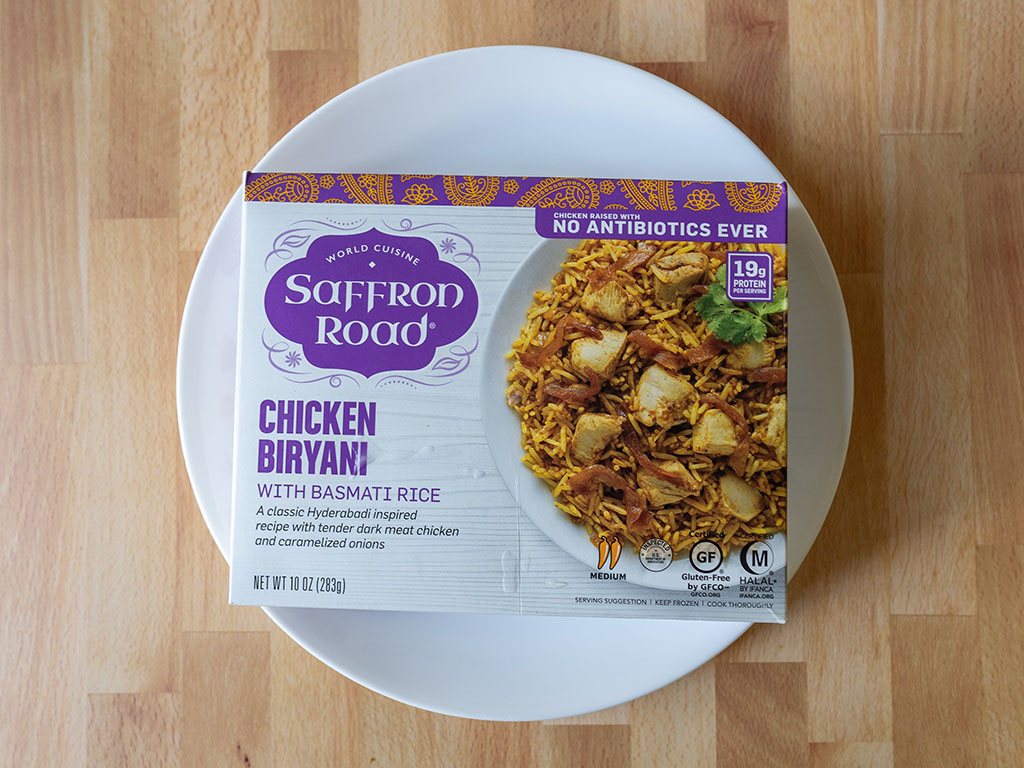 Saffron Road is one of the more common names in the freezer aisle when it comes to frozen Indian cuisine in the store. I actually surprised myself when I checked out archives, I’d never tried so much as one Saffron Road dish previously! That needed rectifying so I started with this chicken biryani – one of my favorite dishes at a sit down restaurant.

Inside the cardboard packaging you will find the standard microwave tray sealed with plastic wrap. Interestingly the frozen sauce isn’t integrated with the rice out of the box:

Instead you peel back the plastic wrap a little to allow for steam, the cook for four minutes, followed by a stir and nearly three more. Second surprise – this one takes a little longer to cook than most.

I was pleasantly surprised by the final dish. The sauce was just enough to give the rice a minimal coating: I was worried it wouldn’t be enough at first – but it was perfect.

There’s not oodles of chicken, but what there is was decent quality and not gristly or mealy. The rice was a little on the softer side for my tastes, a little mushy than al dente.

The dishes flavors were solid enough, recognizably that earthy biryani flavor. Mind you, you won’t find the dish studded with vegetables, fruit or spices like clove and cardamom. It certainly doesn’t have that regal and resplendent feel of a restaurant dish, but nor does it have the price. This set me back $3.98 at Walmart. A restaurant dish would be closer to 3 or 4x that price.

This is a respectable if not regal version of a chicken biryani. The price under four bucks makes up for the fact it doesn’t have the glitz and glamour you might expect from the dish at a sit down restaurant.