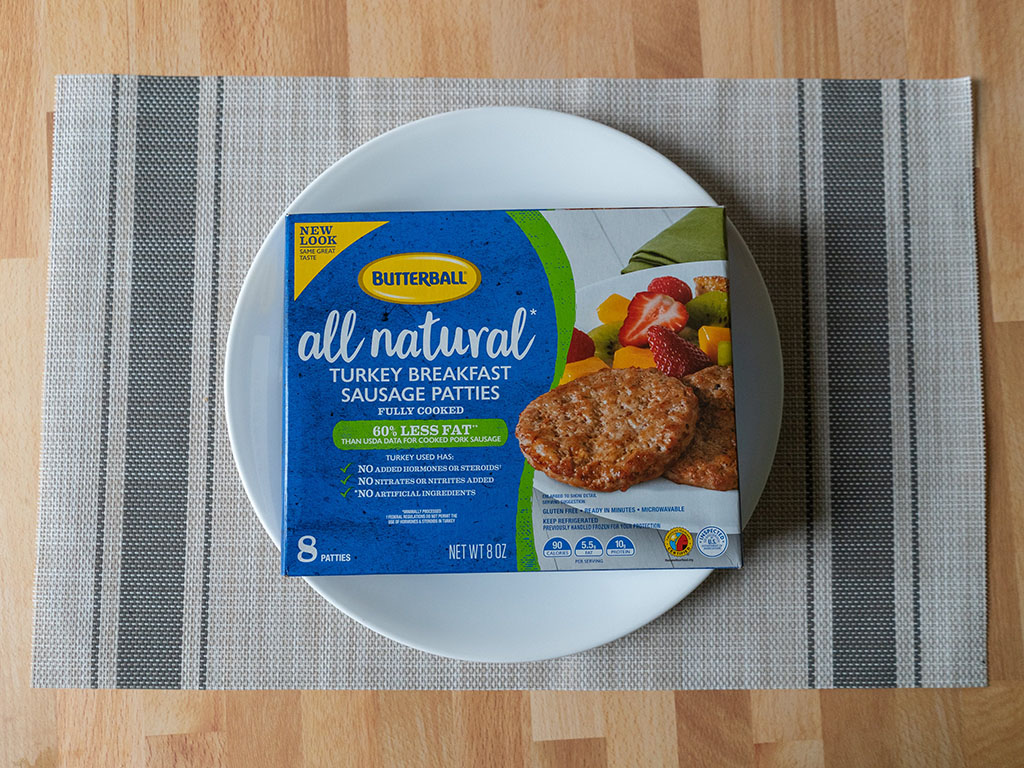 Breakfast in less than 60 seconds? Those kind of promises are enough to make me snatch greedily at any package on the shelf; I am after all, a man of limited patience and most of my mornings begin with little more than a coffee and a grunt. These quick heat turkey patties from Butterball though…maybe, just maybe I’d found the perfect lazy meets healthy start to the day.

Inside the cardboard packaging you’ll find eight patties portioned as follows. You can easily separate the pack into two, but once you open one side, you are in effect opening four at once as the package doesn’t reseal. The packaging doesn’t indicate how long the product lasts once opened. No biggie, two patties are the recommended portion.

As mentioned above, cooking couldn’t be quicker. It takes barely one minute to microwave these to piping hot. Indeed, it takes far longer to toast a muffin than it does to heat these patties up. Here’s a picture of the interior after cooking, you’ll note they’re pretty lean with minimal mystery filler:

Flavor wise, these sausage patties definitely have that processed and pronounced turkey flavor you will immediately recognize. Duh you might say! These are definitely strong though, so much so I didn’t prefer them on their own. Prepared with a slightly running egg and ketchup though – yep – these hit the spot. I made my way through the box in quick fashion, but again, I wouldn’t personal advise eating them plain.

As lazy as even I am, this is a product I can get behind. In truth, these ended up as lunch snacks for myself – as I’m still incapable of much more than firing up the coffee machine first thing.

Two patties is a portion size and they’re undeniably healthier than their competing pork based peers. The ingredient list is mercilessly brief and as mentioned – they cook up in lightning quick time.