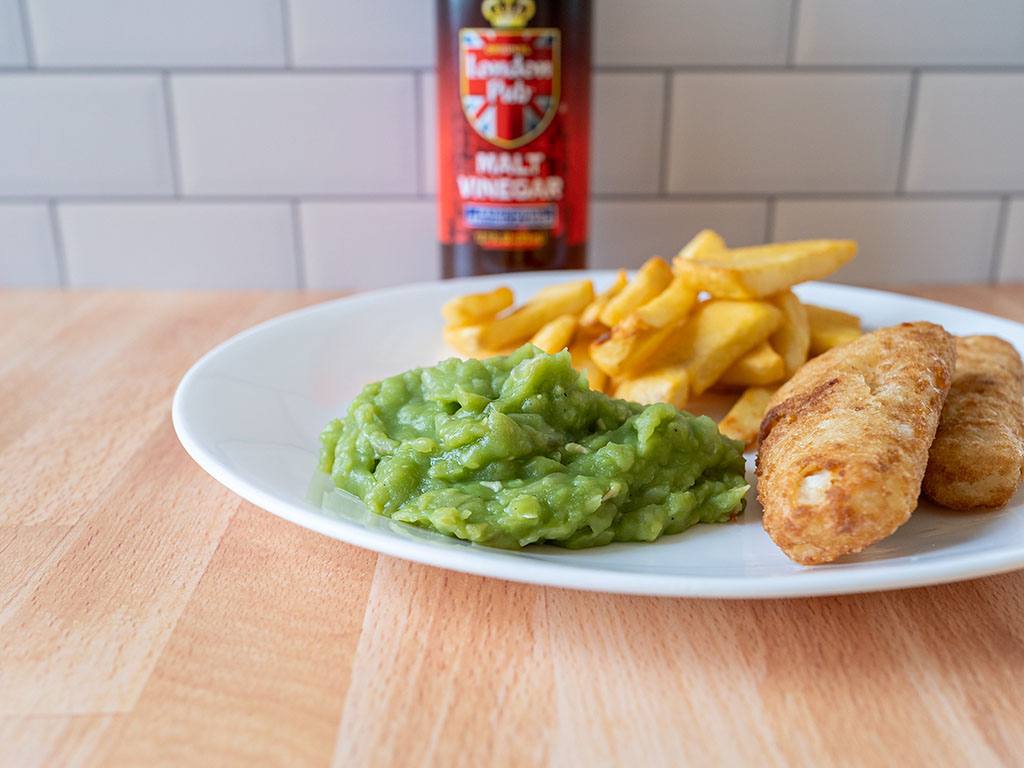 Lets start with the elephant in the room. Or should that be pea-misinformation in the room. You cannot – and should not – be making mushy peas with garden peas, fresh or frozen. Anyone who tells you otherwise is a clueless idiot. Run away from any recipe website that tells you mushy peas are just fine with a few peas mushed with the back of a fork and some butter.

Like em or loathe em, the British mushy pea is in fact a very specific and exact thing. There is no substitute for the real deal here. To be precise, mushy peas start life as marrowfat peas; these are mature peas (as opposed to younger fresh garden peas) left to dry out. They’re the crucial component in mushy peas (and those wasabi snack peas you eat too actually).

Dried marrowfat peas are pretty difficult to nigh on impossible to get a hold of at most common US grocery stores, but they’re easily available online from importers. You can buy the brand I use on Amazon here (I get a modest referral fee if you do!). I most recently managed to snag a six pack of dried peas for a little under $20; expensive by UK standards, but not so bad when thought of in the context of about $3 for a side dish.

Indeed one of these boxes of dried peas I use (see below) is usually enough for four to six quite hefty portions too, so the cost per serving is fairly decent.

So how do you make mushy peas?

It’s possible to source your own dried beans etc, but the easiest way is to start with one of the dry pea kits I mentioned above. With one of these boxes it’s pretty painless, albeit it requires a little planing ahead. This is not a quick dish you can make in an hour.

The process is basically as follows: empty the box of dried peas into a large bowl. You’ll also find two soaking tablets in the box with the peas – mainly bicarbonate of soda. The tablets dissolve in about 850ml of boiling water, which is then poured over the dried peas. They then sit on the counter soaking overnight, Bachelor’s recommends 12-16 hours.

When ready to cook, drain and rinse the peas well before gently boiling in 600ml of (new) water for about 30-45 minutes. The packaging here recommends 20 minutes, but I find a longer more gently boil works best. They’re ready when they start to amalgamate into, well, a mush!

You’ll want to season your peas with salt and pepper too. Some people tell me they like to add a little Worcestershire sauce to the mix for more zing, but I love the peas largely unadulterated. Well, except for lashings of malt vinegar alongside fish and chips!

As I mentioned, each dried box of peas usually makes a fairly decent number of portions. Unused peas will keep for a day or two for re-use in the refrigerator and they also freeze well too!

A further side note: you might come across pre-made mushy peas in canned format at the various importers. These are ok in a pinch, but aren’t a patch on the freshly made peas when you start from scratch. If you’re looking for the REAL English mushy experience, start here, you won’t regret it.

Buy the Bigger brand I use on Amazon here (I get a modest referral fee if you do!).