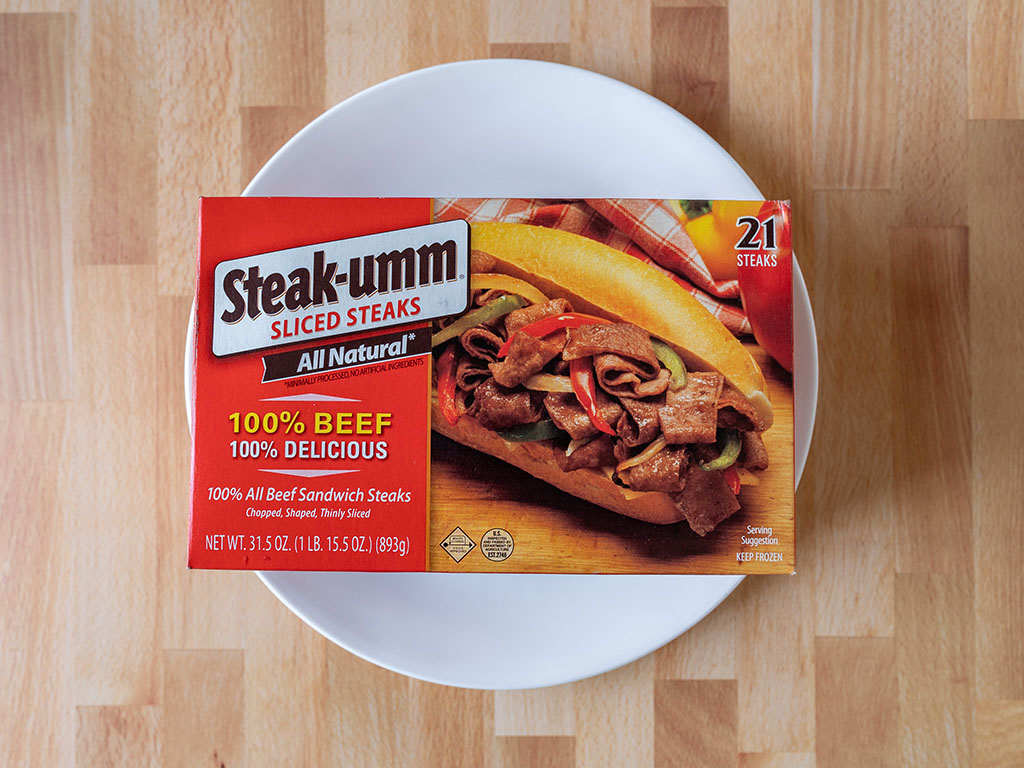 For myself, this one fits neatly into the column titled: like a moth to a flame. A box of uniformly shaped, paper think steak, arriving as it does in one weighty frozen lump – what could go wrong – indeed what could go right? First of all here’s a look at what you’ll find inside the box.

As you can see the “steaks” themselves are packaged wafer think layer by layer, separated by freezer paper. This makes peeling off a couple of thin sheets easy peasy. The inner bag though is not resealable once opened, so unless you’re cooking the largest cheesesteak known to man – you might want to re-home the steaks in a sealable freezer bag.

Cheesesteaks. That’s probably what most people use this product for I imagine. Here’s the result of the above two Steak-umm sheets quickly cooked from frozen in the pan with a smidge of oil. They really are paper thin and they really do cook in just one or two minutes.

The packaging notes these are 100% beef, absolutely nothing else to be found here; this of course helps lend some reassurance to the otherwise utilitarian and institutional appearance of the reformed steak sheets. Even the bold pink hue of the frozen steak has a slight unnatural look for whatever reason. In the tasting though, these are decent.

They’re absolutely not close to buying premium steak of course. Don’t for a second think you’re getting USDA Prime here, or anything close for that matter. There’s slightly more than twenty slices of steak for around eight dollars, so the math alone should should lead to your own conclusions.

So what could go right? Actually quite a lot! Served with the appropriate toppings on some quality bread these make for quite the tasty lunch snack. I’ve also cooked them up in a little thick gravy too and served as a poor man’s “roast beef” as part of a Sunday roast dinner. And I have to confess…I did kind of like that…