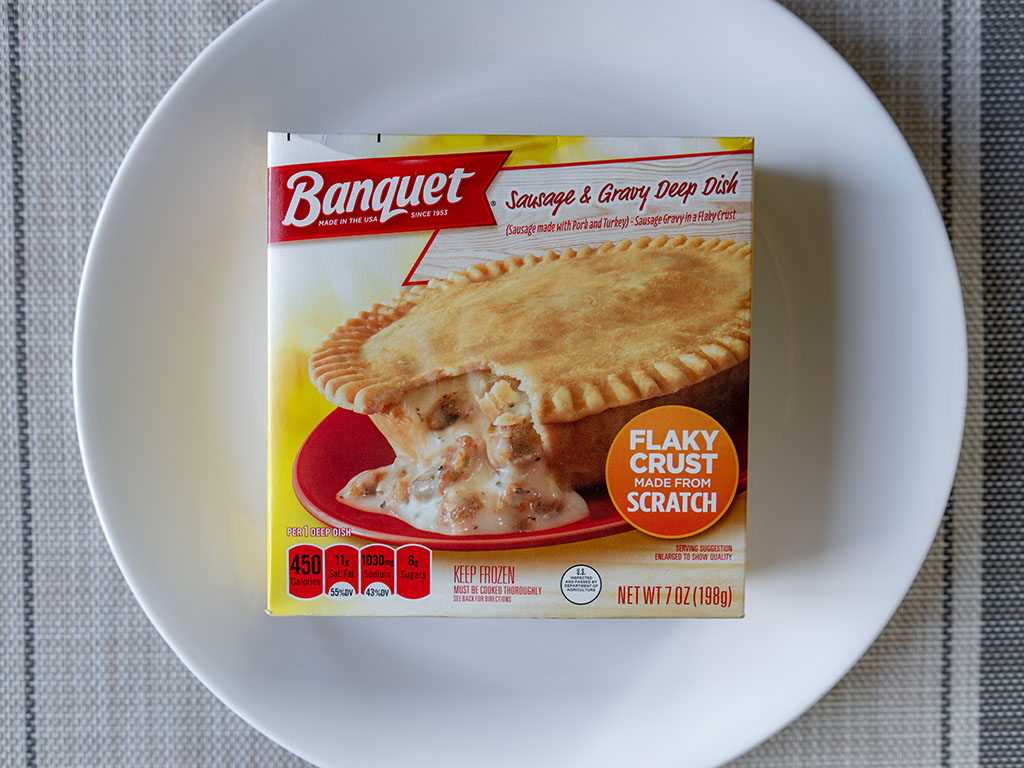 This is a product that’s designed to push all your junk food buttons. A pot pie for breakfast loaded with sausage and gravy. What could go wrong? Sadly, the sausage filling for one, it’s mediocre at best with the country gravy rapidly becoming overly rich. The crust is definitely a winner though.

It’s with no small amount of shame that I added this to my shopping basket. I had hoped to sneak this one past the gaze of my wife, but no, she spotted it and just shook her head before moving on. She’s resigned to my junk food ways at this point.

And of course there’s no escaping the fact – eating pot pies for breakfast (stuffed with sausage and gravy nonetheless) is a slight guilty pleasure. If you’re doing this on a daily basis, we need to have words.

Anyway, a breakfast fashioned pot pie had me intrigued, so how did it fare? The flavor starts well but does quickly become very one note – predominantly it’s one of black pepper and herbal sausage seasoning. As you’d expect, the country gravy is as rich as can be and that does become overwhelming towards the end.

I thought the sausage was very underwhelming, both in quantity and quality. It’s pretty hard to make a poor sausage, but I wasn’t particularly excited with the filling here. Slightly larger chunks of real sausage would be better.

The standout for me here was the pie crust, which is crisp, flaky and delicious. I don’t dare look at the nutrition pictures below as a result.

In the above pictures I followed the oven baking instructions for this pot pie. It was a relatively quick 30 minute or so process, and I didn’t feel confident that the microwave path would yield an equally golden crust.

You may as just look away in regards the nutrition at this point. If you need to ask how healthy is a pot pie with gravy and sausage – you probably need to ask some more questions of yourself.

How much are Banquet Sausage And Gravy Deep Dish pot pies?

I paid just 94 cents for this individual pot pie as of March 2019 from Walmart. It’s hard to argue with anything for under a buck really!