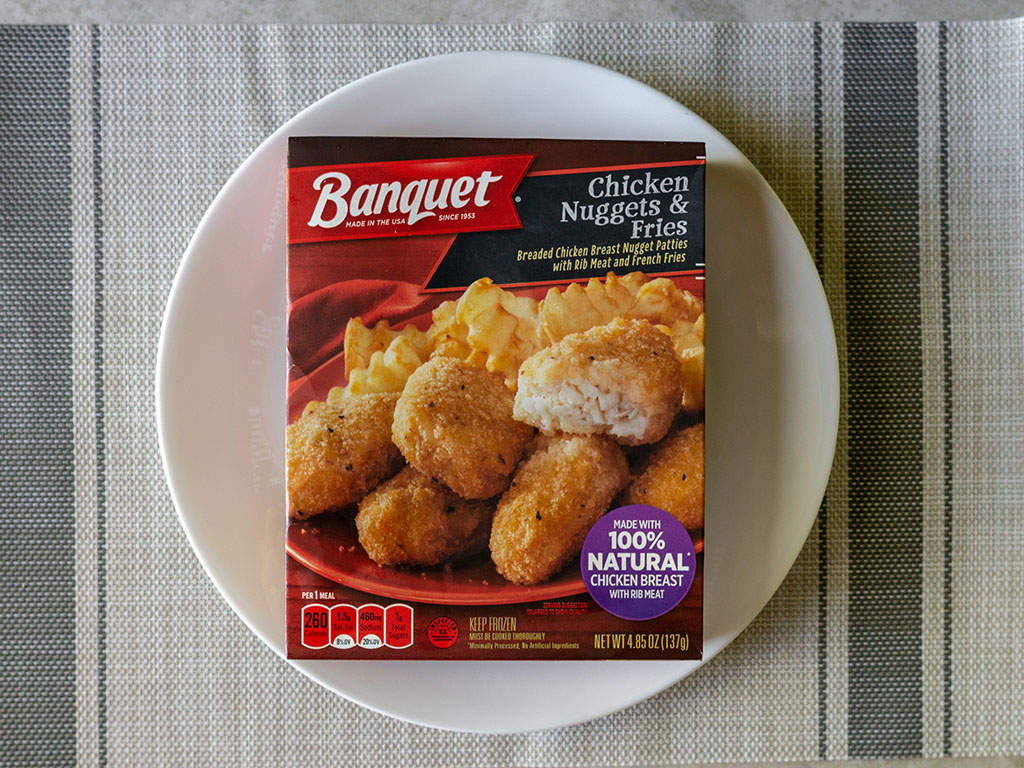 Why you might ask, am I reviewing this product? Simply put, this was listed as the highest selling/most popular frozen meal product at my local Walmart; not to mention it was priced at just 88 cents. I could purchase this meal with loose change found down the back of the sofa. It’s an almost impossibly low price. I also have a certain grim fascination with some of the most processed foods along the freezer aisle, and given the price of this one, I just had to have a peek.

It quickly became apparent this product is popular due to the price, not taste nor texture. The microwaved fries remained perplexingly both simultaneously soggy and undercooked using the prescribed microwave cooking times; they also had a slightly weird, greasy taste too. It’s hard to make a potato unpalatable but this product came close. Side note: don’t underestimate my tolerance for junk food…

The nuggets were markedly better, inasmuch as they were typical frozen/reheated nuggets that bore minimal resemblance to actual pieces of chicken. If you’ve tasted a chicken nugget from the numerous big names along the freezer aisle, you’ll know the taste well.

There were no surprises with this product. My guess is this meal makes for an ultra simple and affordable solution for those facing pressures on their time, wallets or both; but even then, for just a few pennies more, its possible to craft something better than this. A miss for me, no hidden secrets here.

Banquet Chicken Nuggets And Fries – what’s in the box

Inside the cardboard box is a microwaveable plastic tray, the fries and nuggets segmented into separate portions too.

Here’s the final cooked and plated product with a close up of a nugget for good measure:

The saving grace of this product is that it’s relatively not too and nutritionally. Cooking is simple too with just a handful of minutes in the microwave.

As I mentioned, my local Walmart offered this for just 88 cents, an incredibly low price. I joked to my wife that I probably wouldn’t repeat the purchase even at this price.