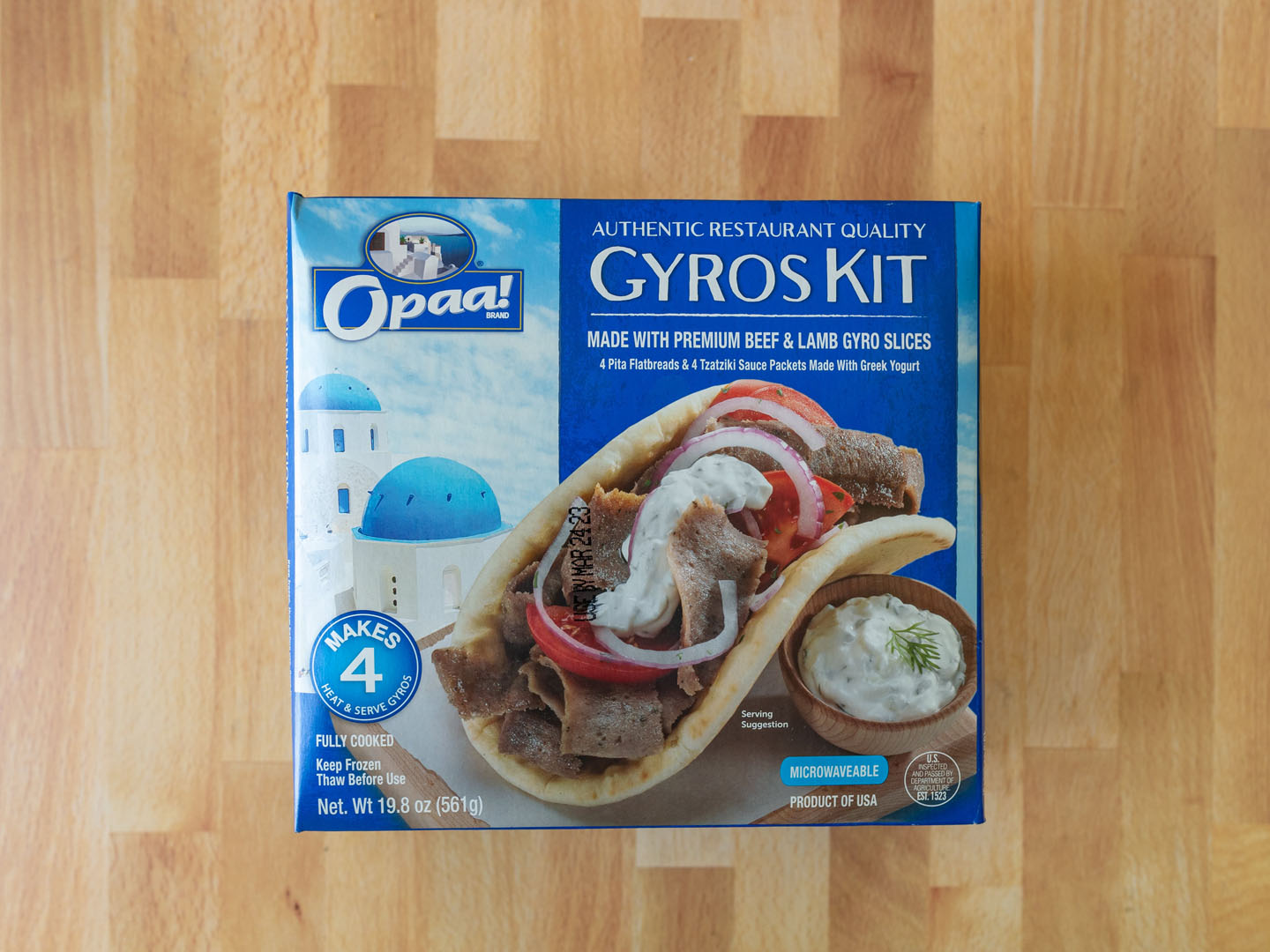 Long terms readers will know my love of a good gyro. From Trader Joe’s remade gyro meat through too making vegan gyros with Impossible meat – I’m in. I love gyros in all their forms, the taco of Greece if you will! When I spotted this DIY gyro kit from Opaa I was checking out faster than you can say souvlaki!

Inside the kit which comes frozen, you will find enough ingredients for four gyro: a good pile of sliced and shrink-wrapped gyro meat, four pita bread and four individual packets of tzatziki sauce.

Cooking: Be sure to defrost the frozen gyro kit before digging in. I only realized this when excitement turned to impatience when I tried to craft my first gyro. Moved from freezer to refrigerator, the gyro kit was mostly defrosted in 24 hours – though the block of gyro slices was still semi frozen.

When it’s defrosted you can use the microwave or stove top to create the gyro of your dreams. If you’re using the microwave as I did, a pita bread will be ready in about 10-15 seconds and four or five slices of gyro meat another 30-45 more.

Taste and texture: Really quite good, surprisingly so. I don’t expect much from pre-packaged products, but this definitely defied expectations. The gyro meat is thinly sliced, and full of rich meaty flavor. It’s not overtly greasy, nor is it too heavily seasoned with herbs and garlic. This won’t repeat *all* day long. The pita is relatively thin, I personally prefer a thicker, fluffier bread, but hey, it’s not bad. Lastly the tzatziki is thick, creamy and has that little acidic zing to offset the meats fattiness.

Overall: All that’s missing are sharp red onion and sweet, juicy red tomato slices; I think we can forgive Opaa for not trying to include those in this frozen product. The whole kit cost me about eleven bucks, making for a gyro under four dollars. Not bad at all, considering with inflation, as I write, my local restaurants are closer to $10 for a single gyro. Of the various gyro solutions from grocery stores I’ve found to date, this is the best.

Is the Opaa Gyros Kit any good?

Yes! Surprisingly so! For a pre-made and packaged frozen product this beat my expectations.  With four gyros per frozen box, all you really need to do is decide what other fresh toppings you want to add.