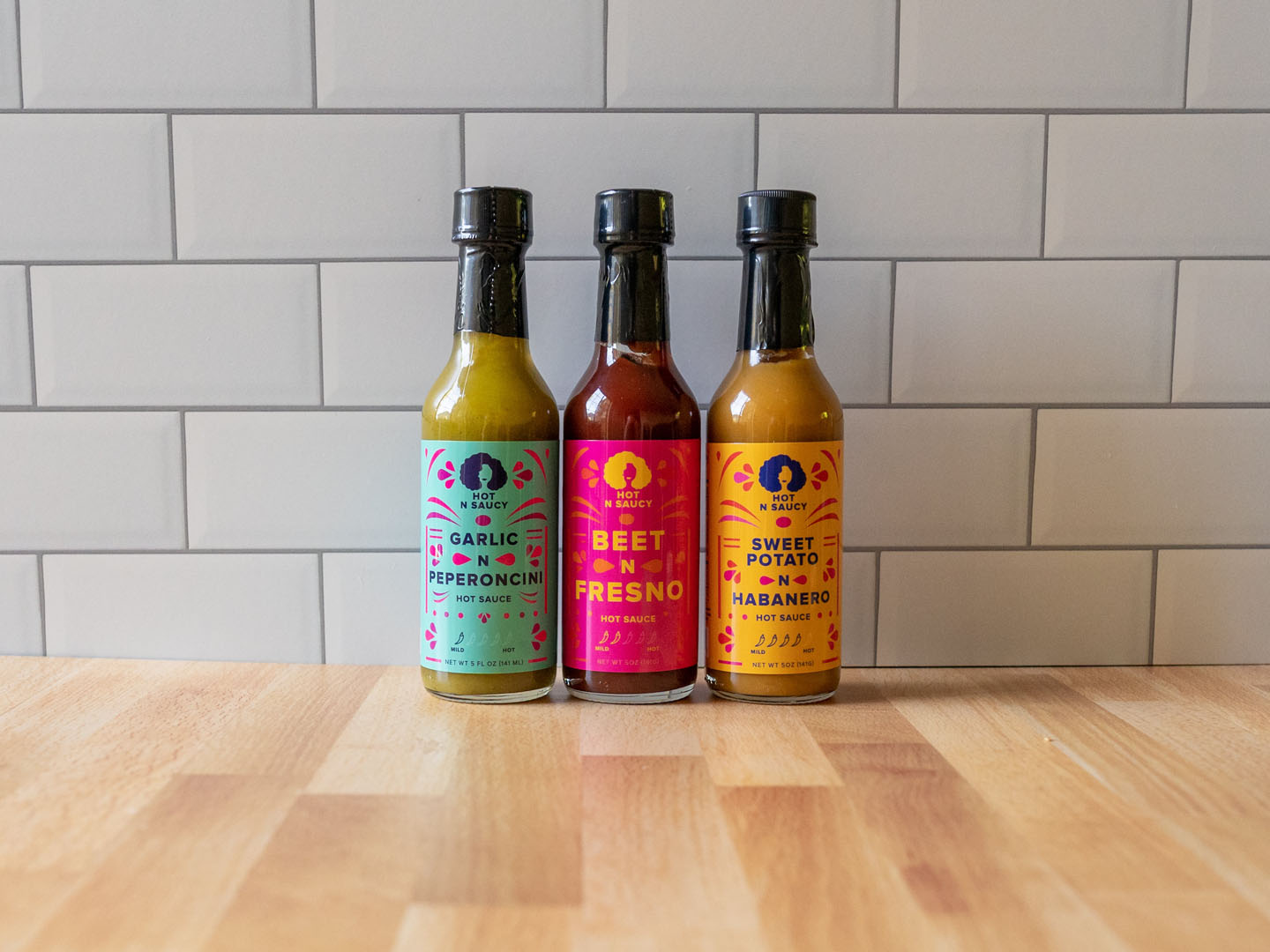 All too often hot sauces become obsessed with scovilles, flame and fire; they can be the muscle cars of the condiment world, all brawn and brash style. That’s not the case with this lineup from Hot N Saucy, where focused flavors are given prominence, alongside varying levels of heat.

It’s worth noting that these sauces do run thicker than ordinary, slicker hot sauces. Pulled from the refrigerated they’ll need a good shake for 30 seconds and maybe a little coaxing out of the bottle.

Beet N Fresno – A visually arresting sauce, jammy from all those beets; which it should be noted are listed first on the ingredients. All the flavors here are thoughtful and central to each sauce, not mere afterthoughts mixed in later.

This hot sauce has lots of sweetness and a moderate amount of heat from the Fresno’s. I used this one in a potato and Field Roast sausage hash. The plant-based sausage uses subtly sweet apples which was a great match for this hot sauce. Those eye popping beets also gave the plated dish a lovely bronzed look too.

Sweet Potato & Habanero – Again sweet potato comes first on the ingredient list. As well as the powerful punch of those habaneros (this one much more fiery than the last) there’s some unexpected warmth and spiciness from clove and allspice in the background. This is quite the fascinating sauce, that I’m sure I have gotten the best out of yet. I used it to add some complexity to an oven baked fritatta, and greatly enjoyed that. I’m looking forward to experimenting more with this one.

Garlic N Pepperoncini – Compared to the other two sauces, this is something of an outlier. This is a thinner sauce that runs from the bottle easily. The sauce is great for adding sharpness and clarity. The garlic adds some interest too. Pictured below I used some as a finishing touch to an otherwise simple dish of lingcod over rice. The acidity of the sauce helped with the definition of the dish and kept everything from floundering into a flabby unfocused mess.

Overall a really fun addition to my hot sauce collection, which is frankly embarrassingly large at this point; indeed, a sauce really has to stand out to join the ranks. E.g. my wife will only let me keep so much of our fridge set aside for sauces 😉 This trio easily makes the list with the flavor-forward approach.

Disclosure: Hot N Saucy sent me this trio of sauces to review, my thoughts and final review of these are of course are my own.