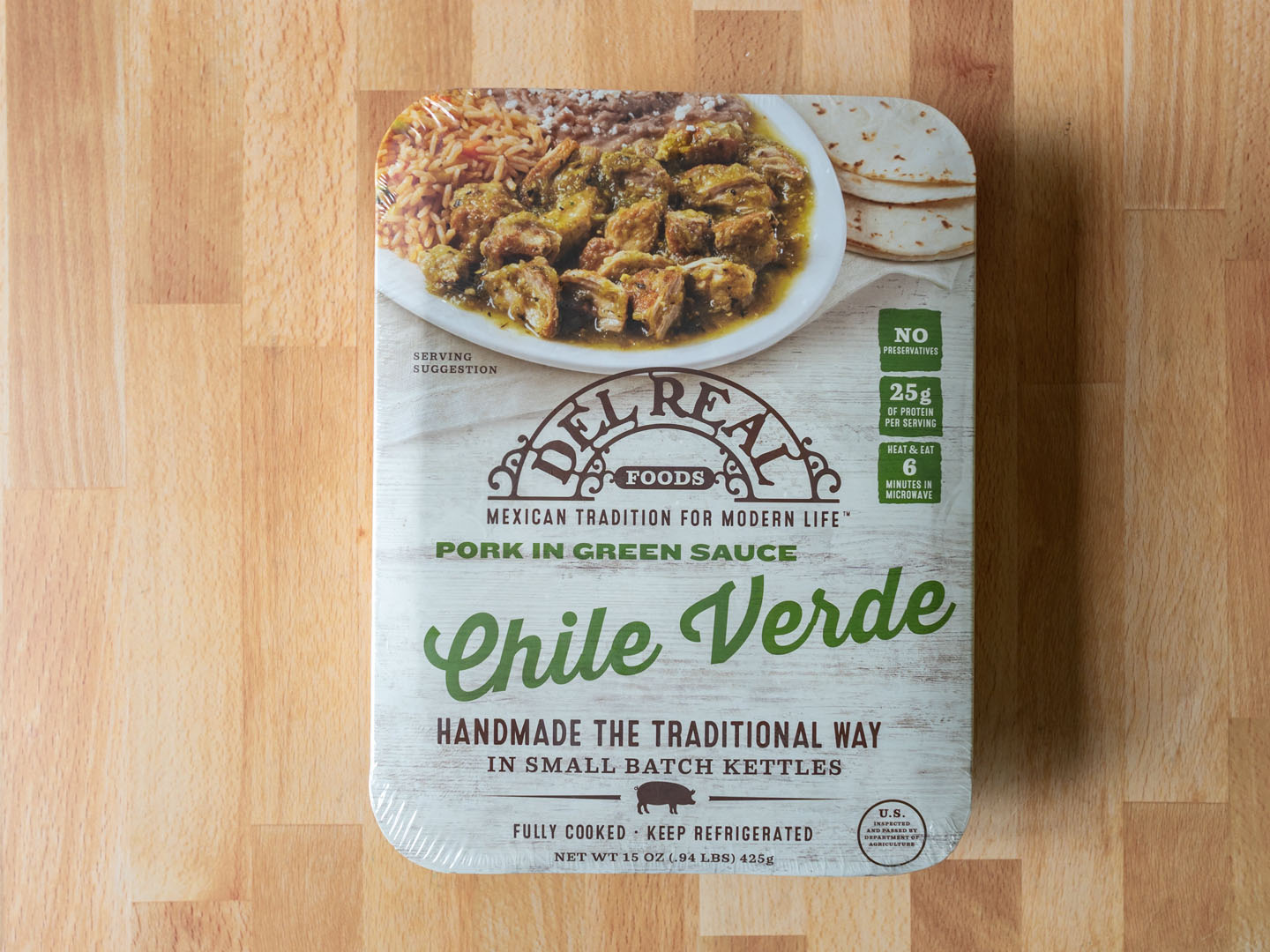 For a pre-cooked and packaged dish the ingredients listed on this Del Real product are refreshingly sparse. The pack lists simply: pork, tomatillos, chili peppers, salt and garlic powder. The chili verde sealed inside a plastic pouch, itself inside the main plastic wrapped cardboard sleeve.

Cooking: You can microwave this or empty the contents in a saucepan and bring to temp – that’s what I did – check out the results below.

Taste and texture: The verde gravy is a little thin and watery overall. This speaks, I think, to a general restraint in the use of tomatillos and chili peppers. When I make this myself I really go to town with both – the pulpy tomatillos really add body, tang and a thick consistency to the dish – which is missing here. It’s not poor per se, it’s simply a “lite” version. I gussied mine up with some extra tomatillo powered hot sauce which brought the verde to life. The main flavor is actually one of pork, speaking of which.

The pork appears to have been fried, featuring dark pieces of golden-browned skin. I didn’t notice much if any extraneous fat, all perfectly rendered. Brough to the boil in the pan the pork was largely fork tender after ten minutes.

Overall: For this type of product – good to very good. There’s nothing really major to fault here. I understand that a mass produced product probably doesn’t to lean into too much spice or tomatillo tartness. At any rate you can adjust the basic flavors to taste yourself. This won’t ever match the chili verde you labor over for six hours on a rainy Sunday yourself – but it is a fine choice for a quick mid week meal where you’re time constrained.

Below you can see the chili verde before cooking, after cooking then in two dishes; one served with pan fried potatoes, roasted jalapeños, guacamole and Wild Coyote Cilantro Lime Ranch, and my favorite – an air fried chimichanga with rice and black beans.

This is a fine pick for a quick mid week meal in a hurry. Sure it lacks the depth of a slow cooked home made chili verde, but it also doesn’t take six hours. The minimal ingredient list is also notable for a pre-cooked dish.