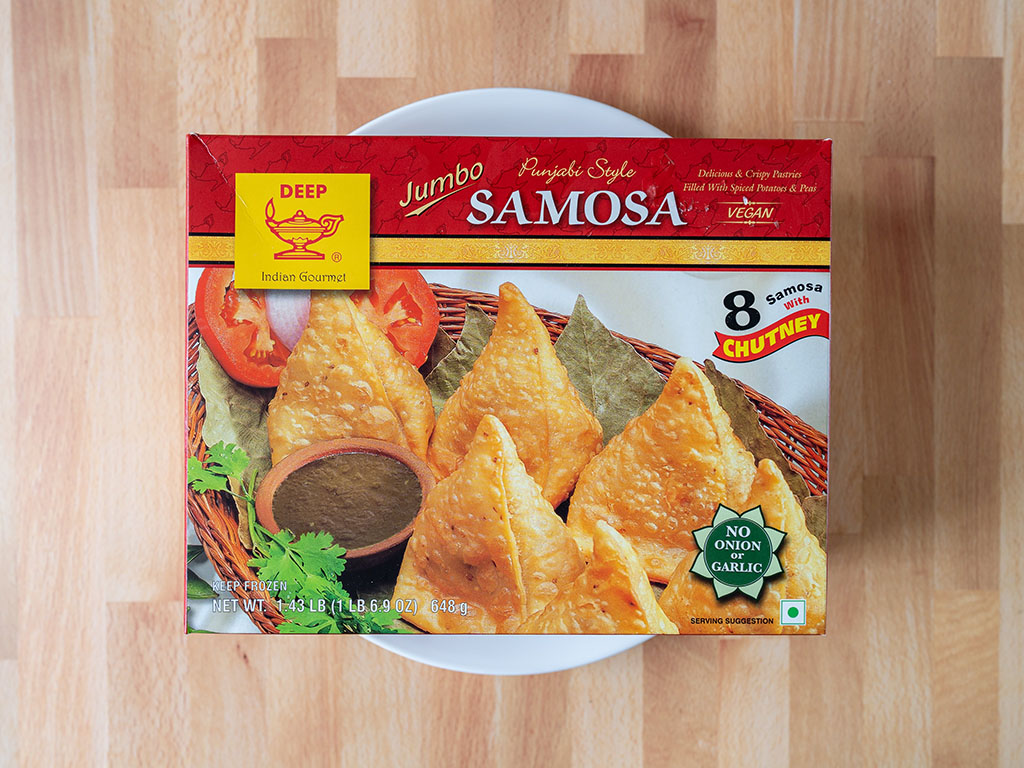 For the longest time I’ve suspected Deep Indian Gourmet is the name behind Trader Joe’s line of Indian foods. They both share the same striking quality of offering exceptionally great frozen food; with the added benefit of being fairly priced. See that naan in the top right of the shot below – that’s from Deep too and it looks almost precisely the same as the Trader Joe naan. More on that in a future review…

Anyway, here we have their Punjabi Style Samosa, served below with that naan and a cheeky Chicken 65 curry:

Eight frozen samosa come as standard here, packaged in a plastic bag, itself in the outer cardboard box. The plastic isn’t resealable once you open it. There are also two mint chutney packs too, the packaging (see below) indicating to use one packet per four samosa. That’s ok if you’re sharing a couple, but a bit trickier if you’re solo dining. I’m not sure I would or want to eat four to myself in one sitting, but maybe…

Because these things really are just fab. These are restaurant quality from the freezer aisle. Scratch that, I’ve suffered through far worse samosa at sit down Indian restaurants. These are simply top notch quality.

Inside the pastry shells you’ll find a veggie friendly mix of mashed potato and pea, seasoned beautifully with a noticeable hot of fragrant, performed coriander. O.k. yeah, I could eat four of these in one sitting 🙂

It’s worth noting there’s no allium here, the front packaging clearly states there’s no onion and no garlic in these. Cooking is pretty simple, defrost for two minutes in the microwave, then bake in the oven to a crisp finish.