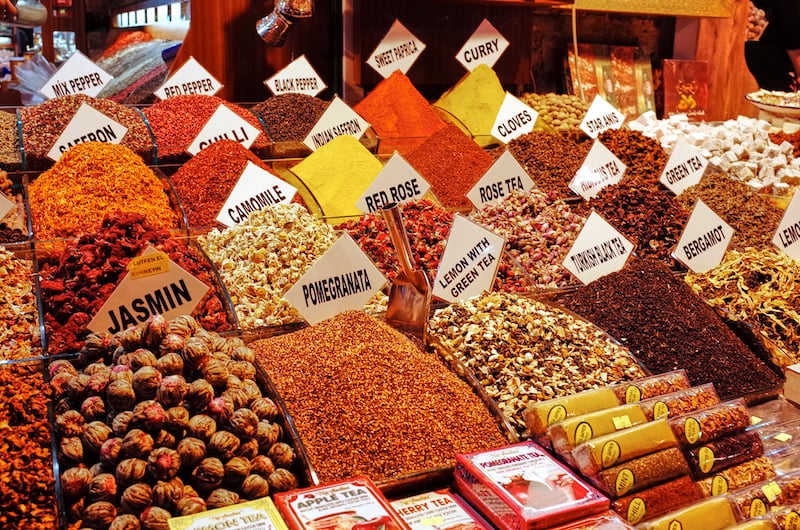 Looking to get to grips more with Turkish cuisine? Check out this de facto guide provided by Go Turkey – a detailed guide to everything you need to know about Turkish flavors:

Situated at the crossroads of Europe, Asia and the Middle East, Turkey’s geographic location puts it on one of the most important trade routes that maintained its prominence throughout the centuries: the Silk Road. Spices were an essential part of the goods moved from east to west in terms of both variety and quantity. It therefore comes as no surprise that this experience of Turkey, which remained as a bridge in the global spice trade for centuries, poses a considerable part of its culinary culture and heritage today.

Thyme: As a species that naturally grows particularly in the Aegean and Mediterranean regions of Turkey, thyme can be produced by drying and then crumbling the leaves collected from the plant. It is widely used in sauces prepared to marinate red meat and white meat before cooking, salads and soups. Simply putting a pinch of thyme in a bowl of olive oil to dip into with a piece of bread is also very popular. And fresh thyme is preferred especially in salads for both its taste and aroma. You can also place a small twig of fresh thyme in an olive oil container to add further zest to an entire bottle of olive oil with the aroma of thyme. Furthermore, thyme water obtained by boiling fresh thyme in water is also consumed after being cooled to relieve the stomach.

Red pepper flakes – Obtained from the hot peppers cultivated and dried in Southeastern Anatolia, this spice is added in the dishes by everyone who love hot food in Turkey. In many restaurants, it is readily available in small containers right next to salt and black pepper on the table. It may either be added while cooking meat sauces, soups, legumes such as beans and chickpeas, and stews or sprinkled on the food at the table.

Mint: Obtained by drying fresh mint, this spice may also be produced at home like thyme, and it is widely used in soups, mantı (Turkish dumplings or very small pockets of dough filled with ground meat and boiled in water), and on cacık –a yoghurt-based side dish. It enjoys eminence among the most popular spices thanks to the flavor it adds to stuffings and traditional Turkish dishes. Sliced fresh mint is added to salads, and goes very well with certain dishes thanks to its strong aroma.

Cumin: This spice is obtained from the plant of the same name, which is a member of the parsley family, and used in the Turkish cuisine particularly in the stuffings, meatballs and various soup recipes, and it is an essential flavoring agent used in meat sauces. It is also widely consumed sprinkled on grilled meats like black pepper. Used as a medicinal herb since the ancient times, the black cumin seeds contain approximately 100 different chemicals also including carbohydrates, minerals, proteins and fatty acids.

Sumac: One of the most widely consumed spices in the Turkish cuisine, sumac gives the dishes a sour and piquant taste together with a pleasant aroma. The spice is obtained by drying under special circumstances the red part of the sumac plant before grinding it together with table salt. It is mixed with red onions or regular onions and parsley to be eaten as salad with meat and thinly sliced liver. Furthermore, it is also used as flavoring in stuffings. A very practical method of consumption is to mix it into yoghurt.

Clove: In Turkey, clove is added to various herbal teas and widely used in desserts thanks to its aroma and pleasant smell. Because it offers an excellent flavor when combined with cinnamon, clove is extensively used in cakes and desserts, tarts and fruit desserts in the Turkish cuisine. Oil of cloves is also known to be good against toothache while cloves are also chewed to prevent foul breath. In many Turkish restaurants, and in meat and kebab restaurants in particular, it is served after meals with onions and garlic that could cause foul breath.

Cinnamon: Obtained from the bark of the cinnamon tree and known for its strong and sweet flavor, this spice is widely used in the Turkish cuisine in both desserts and salty dishes. It is used in all stuffings such as stuffed mussels, seasoned rice, dried fruits, and chicken dishes that get a special flavor when cooked with cinnamon. And because it is a sweet spice, it reduces the use of sugar when added, becoming an indispensible part of Turkish desserts. While apple pie is one of the most widely known recipes, it plays the lead role in cakes and traditional Turkish puddings such as sütlaç (rice pudding), kazandibi (white pudding with caramel base), and muhallebi (milk pudding).

Furthermore, adding a stick of cinnamon while brewing tea will add extra flavor while reducing the need for adding sugar.

In winter, it is also sprinkled in powder form in traditional Turkish drinks such as boza (a thick, slightly fermented millet drink) and sahlep (drink made from sahlep root in hot milk and cinnamon).

Saffron: Cultivated in Safranbolu in Turkey, which was named after the plant, saffron was used extensively in the Ottoman cuisine, usually dissolved in rose water or vinegar. Particularly used in pilafs and meat dishes, saffron is also an important part of milk pudding recipes. It is also added to delicious sauces in chicken dishes and fish stews. Available in either thread or powder form, saffron offers an extraordinary flavor with its pungent aroma and hay-like taste and should be used in moderation.

Bay leaf: Grown in many regions across Turkey, the bay leaf is a spice that has long been used in the Turkish cuisine with its pleasant smell and distinct aroma. Consumed in main dishes and salads, bay leaf is dried before being used in various areas such as dishes, sweetened fruit juices, tomato pastes, pickles and soups. Bay leaf adds zest to meat and fish dishes with its aroma. Particularly added to sauces used for meat dishes, bay leaf is also used to marinate fish, in pilaf, fish soup as well as in the bottom of the pot while boiling turkey and chicken. When bay leafs are placed inside large fish during drilling, the fish meat will absorb the smell and taste of the leaf, gaining a very delicious aroma.

Considering how rich the Turkish cuisine is in terms of spices, it should come as no surprise that İstanbul has a large spice market. Hosting visitors since 1664, the Spice Bazaar is one of the oldest covered bazaars in İstanbul. Situated on the European side of the city, the Spice Bazaar is a historic landmark spread across a large area where various genuine items that belong to the Turkish culture as well as all kinds of spices are sold.

Located in the Mediterranean and connecting Asia and Europe continents that are separated by famous Bosphorus, Turkey is a unique destination that welcomed last year about 40 million tourists. The country that has always been a hub for cultural interaction and home to varying climates inspires the visitors today with its history, nature and gastronomy that reflect the diversity of civilizations for centuries. Located at the crossroads of cultures, Turkey has a distinctive understanding of art & fashion which is the synthesis of tradition and modernity and its extremely dynamic shopping & entertainment life also attracts the visitors from all over the world.

For more about Turkey please visit: