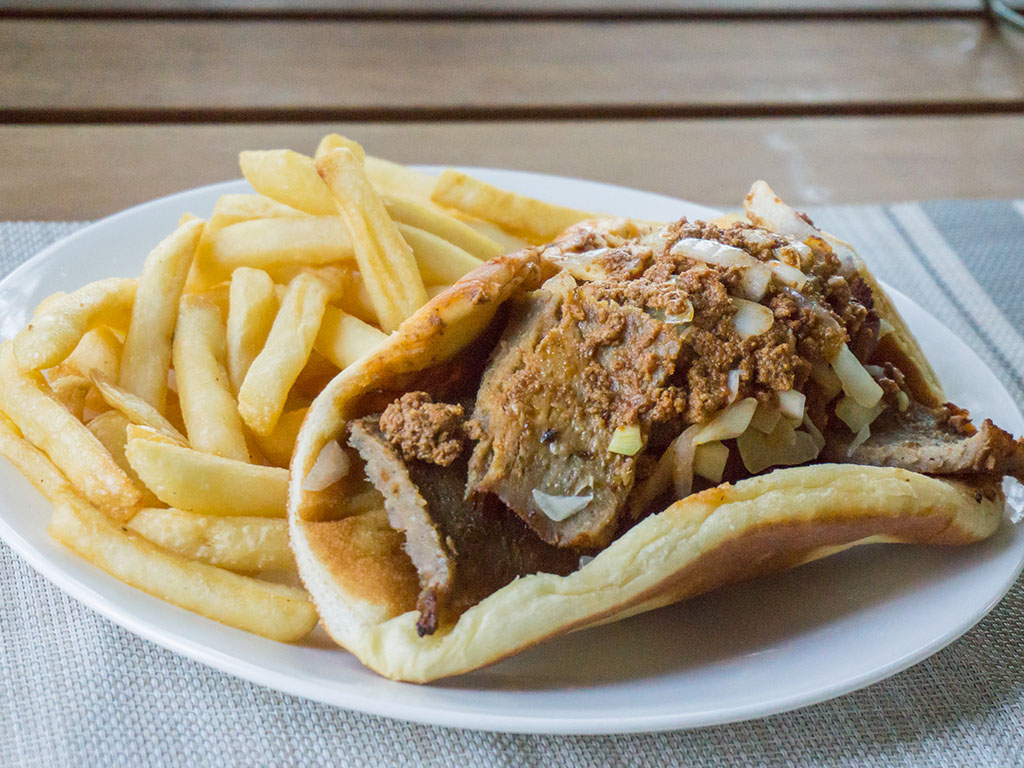 First things first, you might want to know how to pronounce Gyro properly. The correct pronunciation is “yee-roh”, not hero or jyro. I’ve had plenty of people correct me to the contrary, should that happen to you, don’t believe them. I’ve ate more Gyro than is sensible over the years and trust me, it’s: Yee-Roh!

A classic Gyro is typically a combination of beef and lamb ground together and seasoned. The specific seasoning can vary but is usually very garlic heavy. The reformed meat is then hoisted on a vertical spit that slowly turns and is cooked. The Gyro meat is then sliced off to order.

From there, the Gyro meat is layered on a pita bread, which may or may not have spent. little time on a hot plate for extra crisp and flavor; plus, no one loves a cold pita. Standard toppings are red onion, sliced tomato and tzatzki sauce: a creamy topping of Greek yogurt and cucumber. Regional variations also include red sauce as picture above – a meaty gravy that differs from restaurant restaurant; if you find such a place, don’t be afraid to ask for both red and white sauces!

You can enjoy a Gyro for lunch or dinner – heck it’d make a hearty breakfast too just fine. Gyros are not unlike other regional spit roasted meats like Turkish doner kebab and Mexican al pastor.

I doubt many of us are going to set up the production capabilities to create our own Gyro meat. Please invite me round stat if you have your own home vertical spit and roast your own Gyro meat! The simplest way to make this dish at home is to buy remade Gyro meat; and the best I’ve found to date is from Trader Joe’s.

Not only are the Trader Joe’s Gyro Slices priced affordably, they’re also available across most of the country. There’s some debate on how the TJ slices stack up against the real deal, and I’ll confess that I’ve found my own local restaurants better. That said, you really can’t beat the fun and ease of having this solid product on hand.