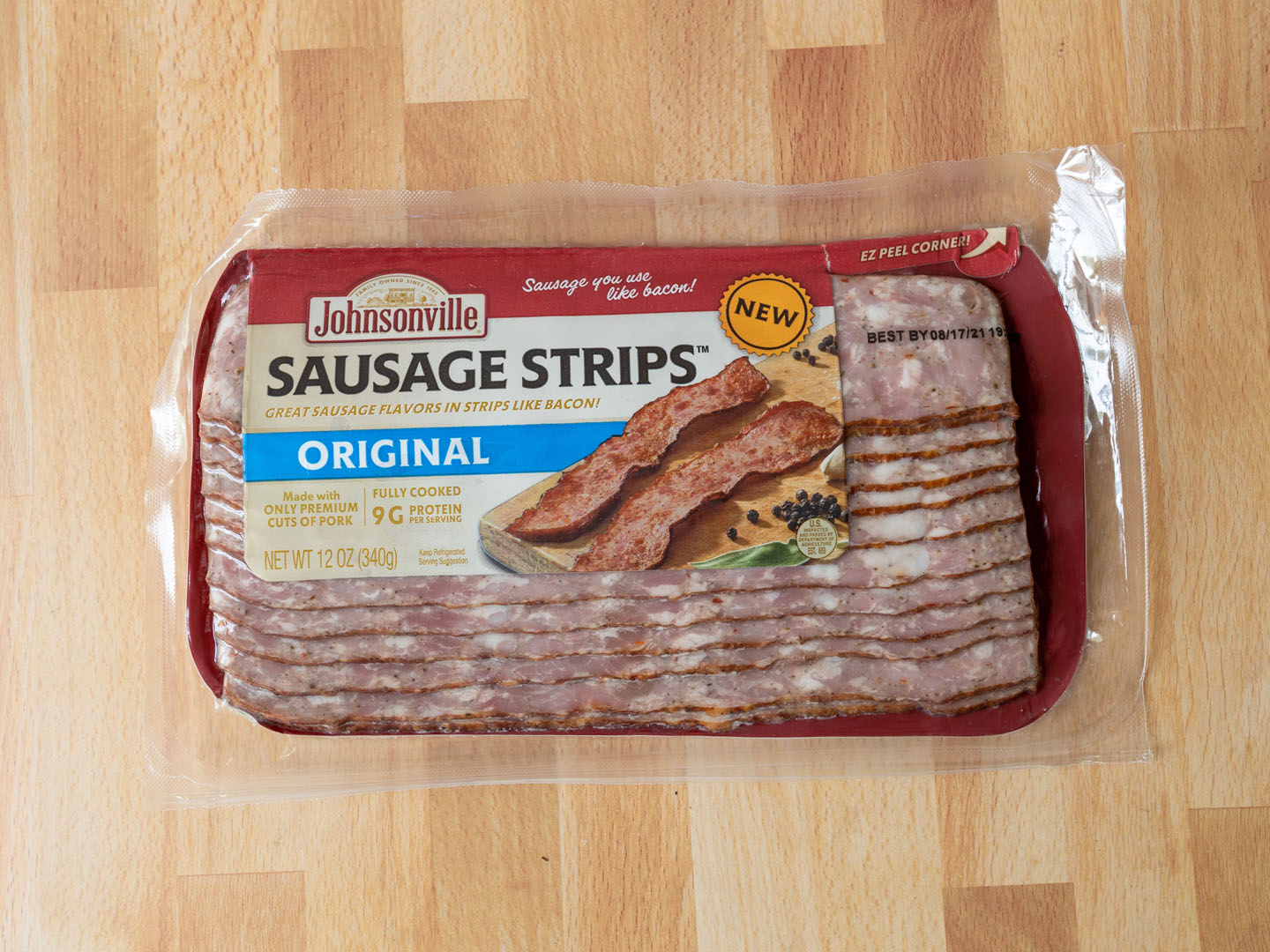 It’s not that often a press release comes across my desk and makes me sit up, eyes wide open. But that’s exactly what this one did. Johnsonville, traditional masters of the bratwurst, have decided to re-imagine bacon. Lets all pause and think about that for a moment…

Of all the things perfected on this planet, bacon is surely one of those that needs no further improvement? Not according to Johnsonville who have launched four versions of this new Sausage Strips product: Original, Spicy, Maple Flavored and Smokey Chorizo.

O.k. I’m joking for the most part. The promise here really isn’t crazed claims of taking bacon to the next level, but instead, crafting a new breakfast protein option that according to Johnsonville has, “40% less fat and 30% less sodium” than typical bacon.

Cooking: This is a precooked product so you’re essentially heating and serving – cooking to your preferred crispy texture. You can bake it, roast it, fry it, air fry it, you name it. Leave it out in the hot sun probably. I actually missed the precooked nature of this product at first, and admittedly overcooked the strips first time out.

Taste and texture: If cooked long enough, the strips crisp up exactly like bacon. They develop a remarkably similar texture to the product it pays homage too. The taste (this is the Original) is a mellow herby-sausage flavor with lots of smokey-bacon notes. Johnsonville smartly didn’t go overboard with the seasoning here. The flavor profile wants to maintain the allure and allusion of bacon, with just a hint of sausage sweetness. It’s sort of like a weird ham-bacon-sausage hybrid.

I should note the product is very salty, and that comes from someone who isn notoriously salt addicted in the first place. This is surprising given the products claims to a lower sodium status. They certainly taste saltier than typical bacon.

Verdict: Surprisingly good. If I am honest I thought this would be nothing more than pressed thin, rectangular sausage strips, but the end result is indeed a weird sausage-bacon hybrid. The crisp of bacon, a mild taste of sausage. Its it better than bacon? Don’t be absurd. Is it better than sausage? Well no, not quite. Is it its own new, strange thing thats plenty tasty – yes, yes it is.

What else: I would very much file this under the guilty pleasure heading. With that in mind, here’s our list of other comfort eats when you need calories and flavor first!