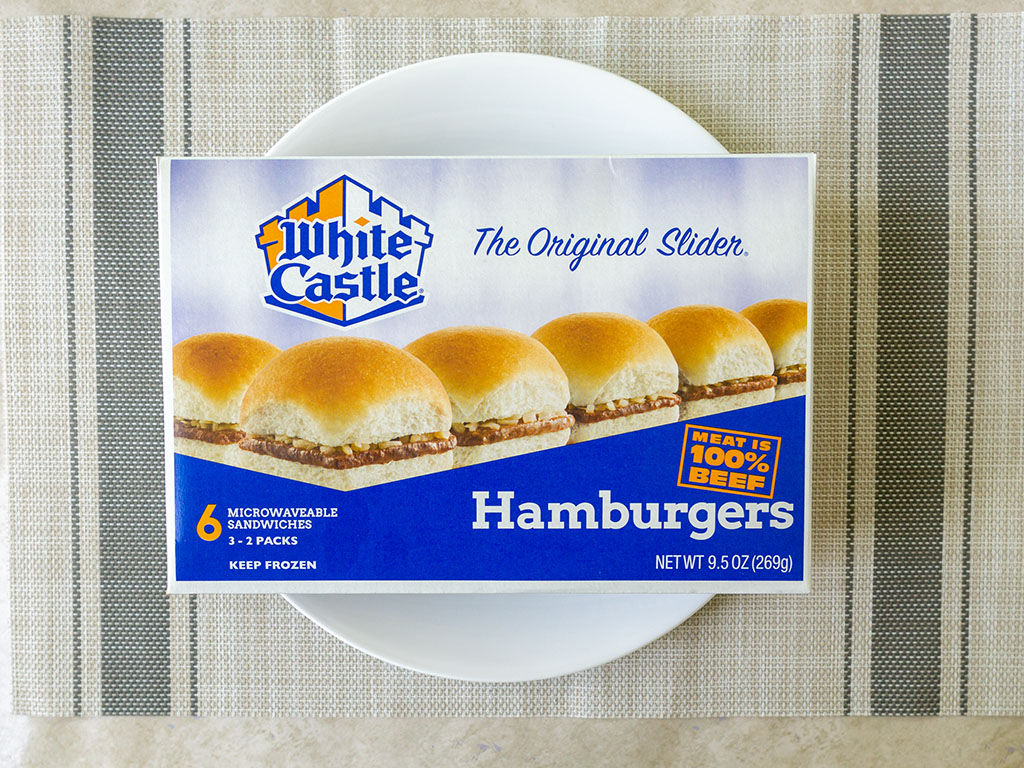 A cautious yes! They’re never going to be as good as the real thing, but for a quick comfort food treat in mere minutes – yes – these certainly hit a certain spot.

White Castle – it’s a brand name that inspires a cult like following. Just like West coast based In N Out, this burger brand has some of the most obsessive fans in the food world. Curiously, both chains are referenced with reverence in pop culture – Big Lebowski and Harold And Kumar anyone? Unlike their Californian cousins though, White Castle offer this product in the freezer aisle of many national grocery chains. Just how good could these White Castle sliders be from the freezer, to microwave, to belly?

I’ve walked past the smartly packaged white and blue boxes for years now. I’ve always given them a sideway glance but never made the leap and bought them. Well, since starting Shop Smart, I felt honor bound to you dear reader, but lets be honest – me – to find out once and for all.

I have to confess, I was expecting a huge let down from these. Hype + freezer + microwave + big brand product in your own home. That equation usually always results in sadness. And I’m really happy to say, these really aren’t half bad. In fact I rather enjoyed them truth be told. Actually, I’ll be truthful with you, I ate the whole box in one sitting.

I started off just sampling a couple and the remaining four just looked so small and appetizing – down they went. It’s not as terrible as it sounds, you can see from the pricing and nutrition below, this really only adds up to grabbing something similar from a fast food restaurant anyway. Besides, if you’re microwaving fast food burgers for home consumption – I think we can all agree health concerns are the last thing on your mind. Comfort food and flavor sure, calories, no.

I think the appeal of these burgers is the steamed buns and onions. The sweetness of the onions really clinches the deal here, and I found the sliders cooked up admirably in the microwave, no mushiness or weirdness. I did have to cook them a little longer than the package instructs is all.

A total of six White Castle sliders come in the box. They are separated into little packets of two.

At Smith’s I have seen these for $4.99 for the six packet. That works out to about 83 cents a slider, which isn’t too bad. And if like me you eat the whole box in one greedy go, it’s still probably less than the price of a big fast food burger these days anyway. Walmart stocks the product even cheaper at $3.88 per box – albeit for the cheeseburgers – making for just 67 cents per slider.