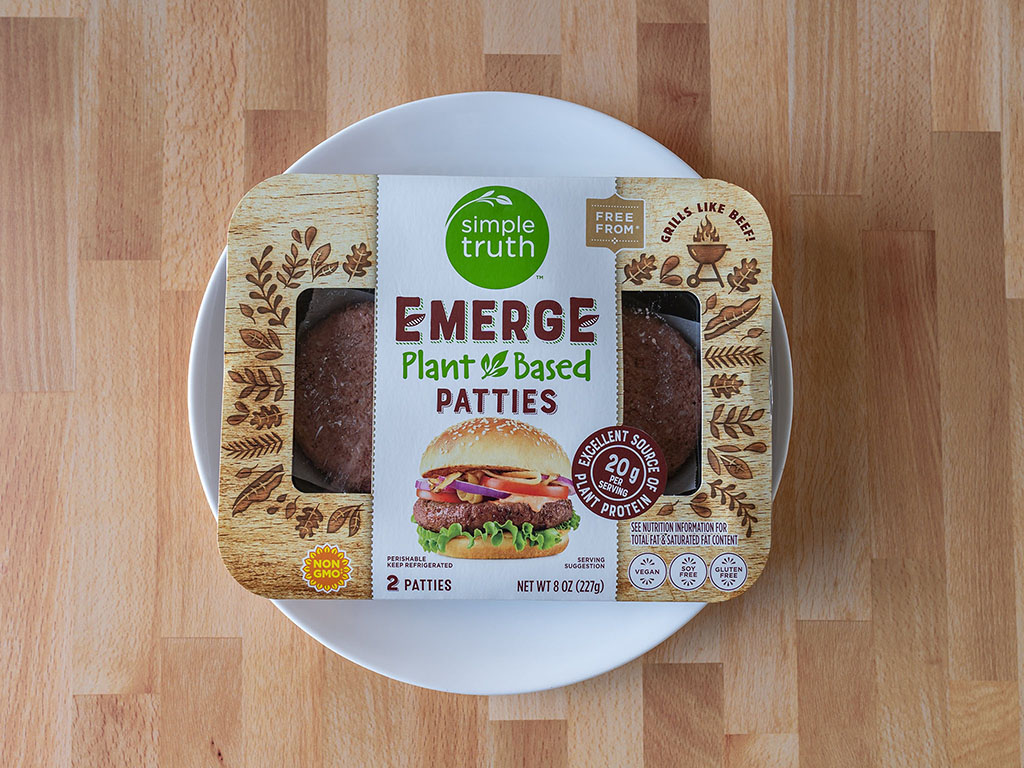 Let’s get the obvious elephant in the room dealt with first. These burgers from Kroger are made in the spirit of those from Impossible/Beyond, if not a loving homage to the Beyond Burger itself. Not only do they look very similar in their raw format, the ingredient list reads similarly too (see below). Not that there’s anything wrong with that in our book, initiation being the sincerest form of flattery and all that.

But how do they compare? Well, out of the box they look remarkably similar to the Beyond Burger – right down to the paper backing that you’ll find under each burger in the box. Opened, the aroma of the burgers is fairly similar too.

Cooking the burgers is where differences start to emerge. The burgers ooze notably less grease. Where the Beyond can often end up swimming in a lake of oil when pan cooked, this Simple Truth patty is much drier. Nutritionally they’re actually a little fattier with more saturated fat – but it doesn’t leech out during cooking.

That less greasy element continues into the tasting too. There is a distinctly less greasy/oily mouthfeel with these patties compared to the Beyond. Texturally these are slightly more meaty but still quite close to the Beyond. Taste wise they’re remarkably similar too. If you’ve tasted a Beyond Burger you’ll immediately recognize that pea protein signature taste – it’s far less pronounced here – which means if you’re put off by that, this burger might be a better choice. The burger certainly stands out less prominently when loaded up with a variety of toppings.

I honestly didn’t expect much here. When a store launches it’s own in house product and then goes head to head with a product that’s reputedly invested tens of millions into the space – I’d expect a poor copy. That’s not the case, these Simple Truth plant based burgers are equally as good as Beyond in my mind.

Which is best? Each to their own really. The Beyond offers an oilier, richer mouthfeel with softer texture. The Simple Truth is less greasy, firmer and drier with less pronounced taste. The nutrition is very similar to both, as you can see from the recipe list below, as are the ingredients.