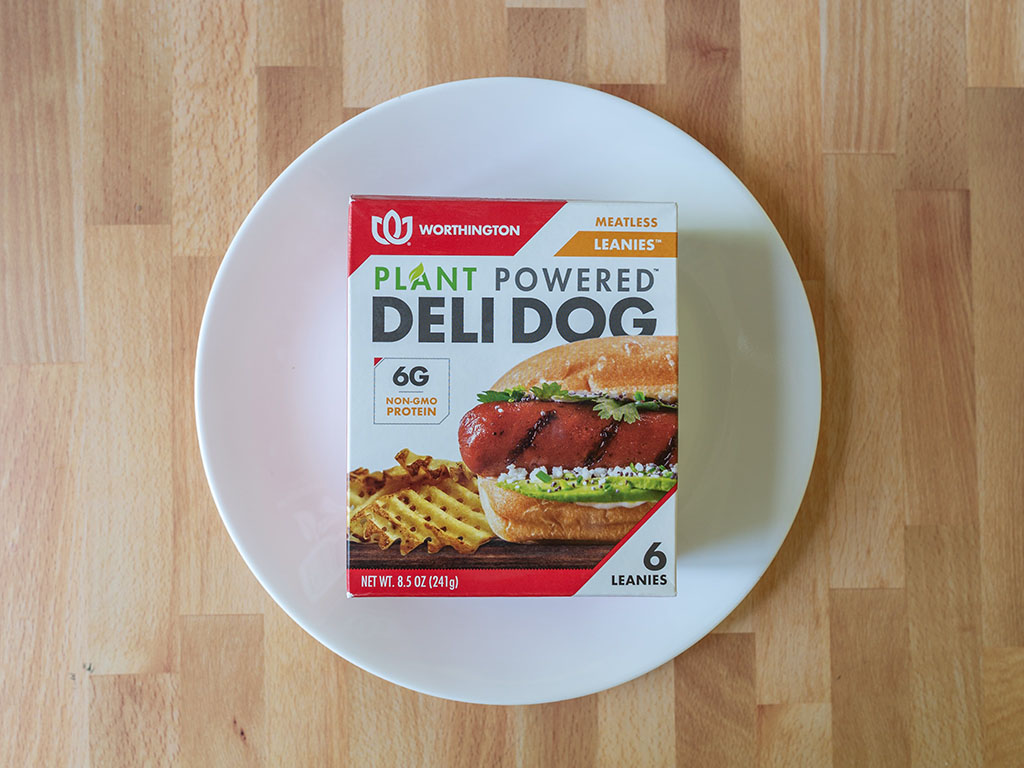 If you’re an out and out vegan I’m guessing you know about Worthington. Apparently this product lineup is the work of Heritage Health food – a very old brand that until 2018 focused on veggie products. The Worthington name is their foray into the vegan marketplace – you can read more here.

I’ve personally only just encountered them, randomly picking up these plant based deli dogs during a recent shopping trip to Sprouts. I’m not sure how new they are pe se, but they’re completely new to me. As such I didn’t have any preconceptions going in. Here’s some shots of them out of the box in the (non resealable) plastic bag, and then cooked up:

The verdict? I was pleasantly surprised…actually I was instantly hooked! For me these immediately blew all other meat free hot dogs out of the water – at least the ones I’ve tried from MorningStar and Lightlife. The texture in these meatless leanies (we’re still chuckling at this odd name, despite weeks passing) are much less mystery mush, and more meatier, coarser bite. They’re still not a like for like swap with real hot dogs mind you.

My favorite part here was the taste though. Many plant based dogs have a very strong artificial note, that was less present here. There’s that hit of artificial smoke, but not an unpleasant amount. Again, they’re still noticeable not meat, you’d be hard pressed to convince anyone others – but they are mighty tasty.

A word of caution on the cooking methods. I’d skip the microwave unless you want to lose a few dogs in testing. We followed the packaging instructions (see below) and ended up with rock solid, cremated dogs. We have a fairly modern Phillips 1700W microwave, but still, the instructions were way off base for us. I had much superior success simply boiling them in a pan until they hit temp. I don’t think I’d personally bother with the fuss and mess of pan frying.

Yes, we’re big fans of these. They’re not exactly a like for like hot dog replacement but they’re a fun product in their own right. If you’re looking to ditch the meat the texture of these plant based dogs is coarse and meaty, they have a fine flavor too.