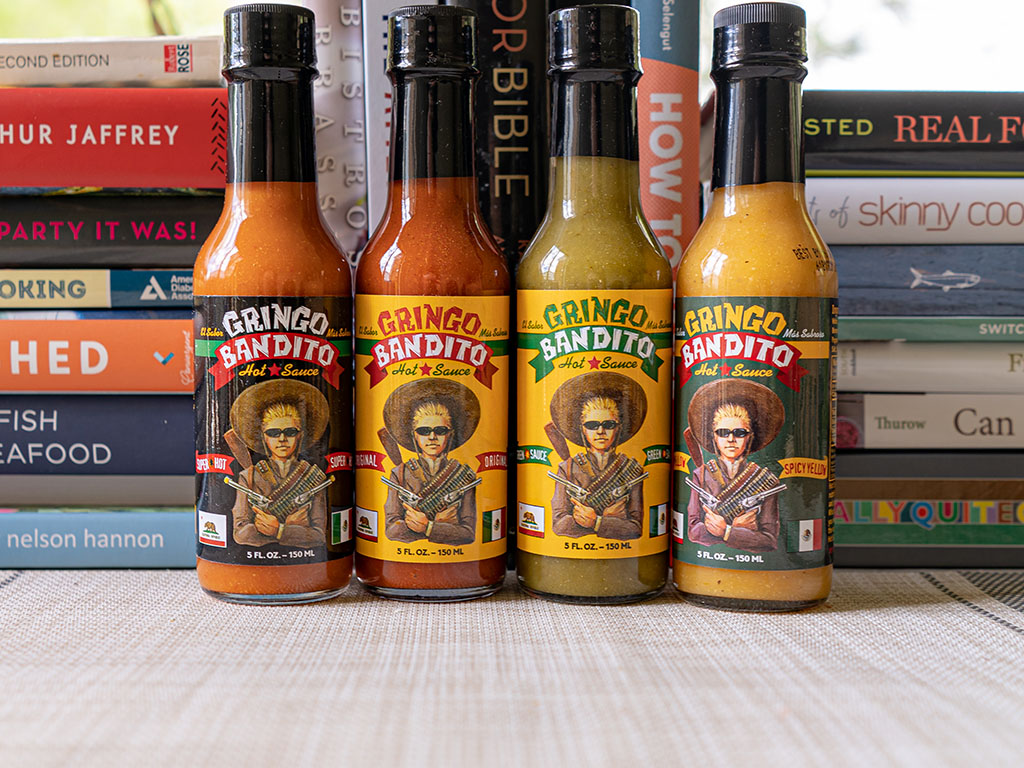 Definitely! Battle hardened chili heads might find the range relatively mild overall, but these are fun and balanced sauces. Their tamer nature means they’re a handy goto for day to day cooking and garnishing, where you might not want to add nuclear-level spicing to a dish.

The back story of this particular hot sauce is certainly unique. At least amongst the huge collection I have on hand I’m not sure any others can claim to be made by a rock star…

Gringo Bandito is the hot sauce company started by none other than Dexter Holland, of the punk ban The Offspring. Despite the famous creator, the startup story is one I am sure many will be familiar with in the home-spun product space:

I just thought it would be cool to have a hot sauce,” says Holland. “I gave away the first batch as Christmas presents to my friends.” The response to this new hot sauce was so overwhelming that Holland decided to put it out commercially.

Sales were modest at first, and the hot sauce was distributed only in Holland’s native Southern California. “It has always been a DIY operation for sure,” Holland says. “It started small but it has just kept on growing.”

After several years and almost a million bottles later, Gringo Bandito hot sauce has garnered a worldwide audience and a loyal following. “We’re not the most well-known hot sauce out there,” says Holland, “but once people try it, they’re hooked.”

The hot sauce is now available across the states in many large retailers, including Walmart. The range (kindly sent to us in full for testing by the company) includes four different varieties. From left to right in the picture above, my thoughts on each one:

Spicy Yellow
To my tastebuds this was the spiciest of the bunch. The sharp and sweet habanero base kicks in immediately and I was quite surprised it eclipsed even the Super Hot branded sauce.

Green
An herbaceously rich and relatively mild green chili sauce. This is the perfect sauce for a classic fish taco (see below).

Super Hot
A fairly typical chili red hot sauce, in the grand scheme of things probably a medium heat level. Would be great on breakfast foods.

Original
The hot sauce that started it all. A relatively milder hot sauce with a touch of sweetness and little smokiness. This one would be useful on a variety of savory dishes proteins, chicken, pork etc.

All four sauces are well balanced and can be used liberally without fear; these are hot sauces for the lesser experienced, looking to dip their toes in the spicy waters. The Yellow sauce probably needs the most caution, but die hard chili heads will likely find the sauces tame on the whole.

That’s not to say there isn’t great flavor here, far from it, I loved each of these sauces and find them exceptionally handy in day to day cooking.

Disclosure: Gringo Bandito provided these hot sauce to us complimentary for review purposes.