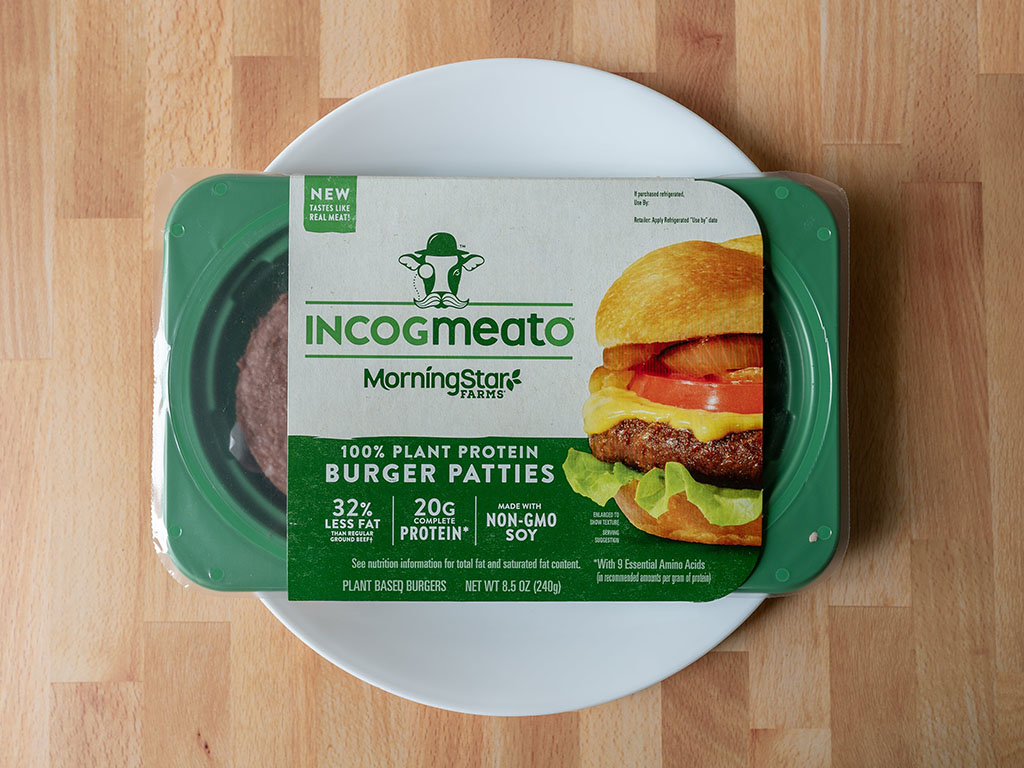 Fans of the MorningStar Farms brand will have undoubtedly watched the huge revamp of the brand over the past couple years. In an effort to move with the times the company has reworked several items, not least completely overhauled their packaging.

Until now though, their products remained very much what we’d call “old school veggie”. The frozen veggie burgers remain the same from the 90s and noughts. The veggie bacon and corn dogs are enjoyable, but relics of a different era in meat free eats.

With this product MorningStar Farms finally steps into the world of the Beyonds and Impossibles. Plant based products that more keenly try to emulate their animal based inspiration. This, their first product, is a meat free burger aimed at looking, cooking and tasting like the real deal. So how is it?

First, some snaps of the burger in its raw state followed by a few cooked shots!

As you can see the MorningStar Farms Incogmeato burger retains its perfectly round shape (I pan fried it). Unlike the brands the patty seeks to emulate that crisp and break and morph in shape like cooking beef – these do not. These cook like a veggie burger of old.

Texture wise the same applies. With pan frying there’s a crisp exterior and softer interior, with a notable transition between the two. Anyone with half a tastebud would flag these on the spot as imitation patties.

Taste wise things aren’t half bad, though it’d be a bold claim and then some to suggest they taste like beef. Instead I’d offer up – they taste like a really solid veggie burger. There’s some smokey notes in there, a little sweetness too. I had no issues in wolfing one straight down, and would happily do so again.

The price of $5.48 isn’t terrible but it’s not fantastic. They Beyond usually sells for $5.99 these and the Impossible isn’t *that* much more per patty. Overall good, just not great.

Nutritionally things are more interesting that I imagined first going in. MorningStar have gone with a soy protein as the basis for the burger, no the in vogue pea protein. There’s plenty of fat here which surprised me. The biggest surprise though, the fiber! 8g per patty I think is a record in this space!

They Incogmeato burgers offer a respectable meat free option. They vaguely straddle the gap between old school frozen burgers and the newer tech-drive pea protein style burgers. They have an enjoyable taste but are not as close a replacement for beef as Impossible or Beyond.